The tickets will be available exclusively on www.ticketea.com ~ 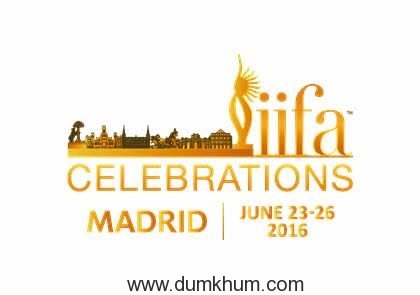 With only a few weeks to go, Indian cinema’s biggest celebration, The 17th Videocon d2h IIFA weekend 2016 is poised to delight fans in the capital city of Spain- Madrid. With the excitement growing, audiences can now grab a seat as tickets for the NEXA IIFA Awards 2016 have gone live and now on sale. The 17th IIFA Celebrations this year will certainly up the ante as it the extravaganza will be a four day long feature from the 23rd to 26th June 2016.

Recreating the magic of Indian cinema, the 17th edition of the IIFA Celebrations will play host to some of the most celebrated stars of the Indian film industry, notable guests, and dignitaries from India and the region, world media and Indian cinema fans from across the globe. The IIFA Awards promise to be a mélange of glitz, glamour and star power as Bollywood’s leading men, Farhan Akhtar and Shahid Kapoor will be hosting the Awards alongside a gamut of powerful performances from Bollywood superstars such as Salman Khan, Priyanka Chopra, Hrithik Roshan, Deepika Padukone, Sonakshi Sinha and many more!

Commenting on the occasion, Andre Timmins Director – Wizcraft International Entertainment Pvt. Ltd said, “It is exciting to be going to Madrid this year with one of our biggest entertainment extravaganza’s planned for the 2016 Nexa IIFA Awards.  We have a fantastic line up of amazing performances from leading Bollywood stars and celebrated musicians alongside other festivities for the 17th annual edition of the IIFA Weekend & Awards. With the magic and beauty of Madrid being combined with Indian cinema, this year is going to be an IIFA celebration worth joining us for with plenty of live action set to take place.”

IIFA over the years has been known to be a truly engaging experience for all, it’s no surprise its tickets are sold out in record time each year. With the show hosted in Madrid, Spain for the first time, the event will surely be a unique experience for the city as Bollywood fans will get to see some of their favorite celebrities descend to the city and get a chance to witness a glamorous night experiencing firsthand the magic of Indian cinema.

Maruti Suzuki India Limited are the Awards Title Sponsor, Videocon d2h are the Weekend Title Sponsor and Hero Cycles are the Cause Partners. The 17th Edition of IIFA Awards celebrations will air exclusively on Broadcast partners, Colors TV.

Conceptualized and produced by Wizcraft International Entertainment Pvt. Ltd. and supported by the key members of the Indian film fraternity, IIFA is the most appreciated South Asian film academy. Also, the IIFA Awards is India’s biggest media event. With a viewership of almost 800 million, it is among the world’s most-watched annual entertainment events. From a one night celebration in 2000 at the Millennium Dome, London, the last sixteen years have seen the International Indian Film Academy (IIFA) movement grow into a cine-packed weekend of film-festivals, workshops, exhibitions, film-showcases and global business forums, all of which climax into the highlight of the Weekend, the IIFA Awards.