The web series will be launched on Saturday, March 18, 2017 on TVF’s premium content destination —  www.TVFPlay.com 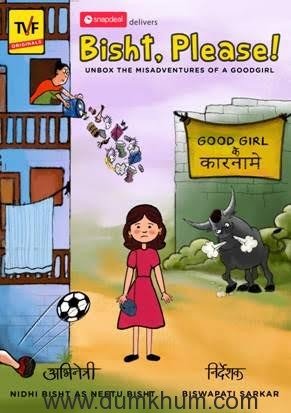 Unbox The Misadventures Of A Good Girl — The Story Line

From an unfaithful boyfriend who wants her to talk dirty in Odiya, to a best friend who mostly adds to the chaos, eccentricity is the word of the day of TVF’s latest web series!

Bisht, Please! is the story of 28-year old Neetu Bisht (played by TVF’s Creative Director and popular actress, Nidhi Bisht), a small town girl who is a victim of wanting to do the right thing. She is someone who strives for a happy life, but somehow cannot help all the unfortunate and awkward things that keep happening to her! There are elements of fantastic and absurd situations that run through the show, making the viewer think – so, exactly, how did Bisht end up here?. All the awkwardness and surreal humour notwithstanding, Neetu Bisht is extremely smart, has integrity, can stand up for her rights and knows what she wants.

This is what Biswapati Sarkar, Writer & Director, Bisht, Please! had to share about the web series – “I would like to thank Bollywood for being so male-centric as a result of which anyone who makes any progressive stories around women right now, seems fresh. Food for thought for all as we celebrate International Women’s Day tomorrow, March 8th. Neetu Bisht’s character is based on the popular Diamond Comics character, Pinky —  a Miss Do-Gooder whose character has been adapted for today’s modern world. Neetu falls victim to circumstances despite wanting to do the right thing, every time! Every misadventure of hers forms the crux of each episode. It’s a funny, enjoyable show!”

The show is a sideway look at the friction that exists between traditional values and thought, and modern social enlightenment. Every episode of Bisht, Please! deals with Neetu negotiating a very real slice of life incident – with episode titles like – Bisht ko Mili Nemesister (about her cheating boyfriend), Bisht ko Lagi Pee (which looks at the trouble that a woman has to undergo if she wants to pee and has nowhere to go, or Bisht Ko Chahiye Raise (which talks about the creative ways that society negotiates a woman’s demand for equal pay).

However, don’t mistake this for a sympathy garnering story for our protagonist though – everything is hilarious, no matter how painful to Bisht – similar to Tina Fey’s character from 30 Rock!

At the forefront of the web series revolution with four of India’s most successful releases —Permanent Roommates, Pitchers , Tripling and Humorously Yours — with over 95 million views, The Viral Fever(TVF) is India’s premier digital entertainment network. Founded by Arunabh Kumar, Creative Experiment Officer (CEO), the Company is creating headlines globally and within India, revolutionising the way Indians access entertainment. Loved by India’s youth, TVF is a pioneer in the new genre of online entertainment, with a focus on progressive and new-age content.