‘Baby Doll’ being pretty much a hit from the upcoming movie Ragini MMS 2 picked by the talented actress turned DJ Shilpi Sharma who remixed now ruling the chartbusters.

The remix that also features Meet Brothers gained immense popularity on social media & the DJ’s fan page has been inundated with messages asking more of such mixes from DJ Shilpi Sharma.

Starting her career by acting in TV commercials for brands like HSBC, McDonalds, Park Avenue & has been a face for the leading soap brand ‘Pears’ for 5 years, doing a sizzling music video for UNIVERSAL with Harry Anand, Shillpi Sharma got her golden ticket to silver screen starring opposite Sunny Deol in ‘Jo Bole So Nihal’ & giving special appearances in numerous movies.

Shillpi Sharma, motivated by her passion for music went a step ahead & pursued the profession that of a DJ & a runaway hit overnight. 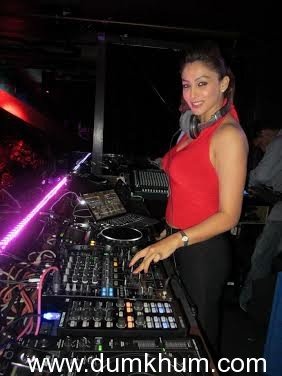 Despite many apprehensions from her family & friends, Shillpi Sharma successfully makes the people groove to her music at various clubs across the country.

With much practice and perseverance from the day she first dropped the needle on a record she has flawlessly mastered her own technique & carved a name for herself in the list of renowned DJs & her feminine side has fetched her more respect.