Actor Sushant Singh Rajput, who is currently riding high on the success of his latest film ‘M.S. Dhoni: The Untold Story’, witnessed a crowd of 600 students earlier yesterday.

The actor, lately encountered a flock of over 600 students who were keen to know about Sushant’s journey and wanted to seek anecdotes from same. The unique success story of Sushant has irked the dreams and has inspired several students on taking up their dreams and not giving up at any point!

The fact that how Sushant being an outsider made it big in the industry all by himself was a point of discussion amongst the students and actor at Jai Hind College in town yesterday. Sushants tremendous performance that he recently delivered in M.S Dhoni was again that the students wanted to learn more about. Be it his journey of prepping for the film or his journey that stared from theatres to TV to films! 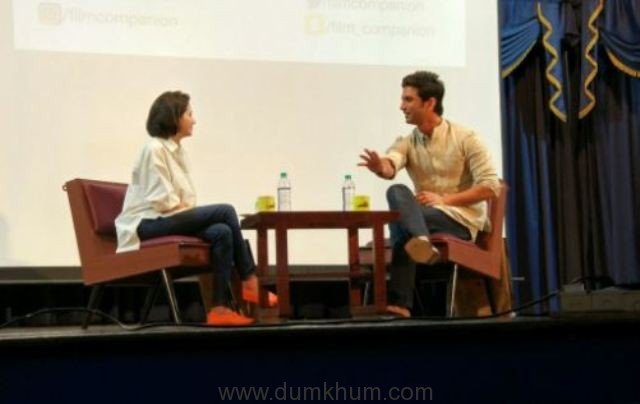 Sushant was overwhelmed by looking at the huge crowd and was extremely touched. The students and Sushant also shared lighter moments while the discussion and they had an extensive question answers session with the Dhoni star!

Sushant Singh Rajput shared his experience and journey, how he came from a middle class family and how at an early age he was expected to be an engineer. Being the youngest in the family he was pampered throughout. The actor who once worked as a background dancer has cemented his space in the film world and is garnering accolades for his performances. Students were highly impressed by Sushant’s expedition and were seen taking some serious life goals.

Sushant, not only proves to be an inspiration to the youth for his hard work and dedication, but also has been giving fitness goals to many. Currently the most talked about actor of his generation, Sushant Singh Rajput is an ongoing Youth sensation and is creating an idealistic role for the audiences.