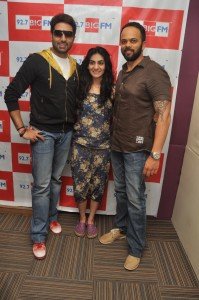 Abhishek Bachchan was in the studios of 92.7 BIG FM along with director Rohit Shetty to promote their latest movie Bol Bachchan.

Unlike the typical promotion for a newly released movie the interaction that RJ Yamini had with Abhishek on 92.7 BIG FM brought to light many different facets of his personality. During his hour long chat with RJ Yamini as well as a few lucky listeners, they heard the voice of smart and thinking marketer, a loving father, an understanding husband & a talent spotter.

As they began RJ Yamini thanked Abhishek for coming to 92.7 BIG FM, in response Abhishek said he was aware of the channels reach across the many small and big cities and towns across India and that as an artist he was keen to connect with fans to engage in a two way communication to get their unbiased views on his latest movie. He added that radio was the only platform where he could get this feedback instantly. When quizzed by some listeners about Aishwarya and ‘Baby B’ Aradhya and who he loved more, Abhishek patiently said that no father on earth can ever answer that question like that. Both were an integral part of his life and he needed them both to make him complete.

Speaking about the movie he reveled an unknown story of a young boy Mudarar, who choreographed one of the dances in it. He said that they both got along famously and worked in perfect sync, while Mudarar choreographed the moves, he left it to Abhishek to give his work that extra zest with his dramatic gestures and expressions. Abhishek said that he was surprised to see such talent and professionalism in someone so young. 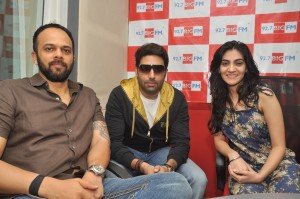