The Jio MAMI Mumbai Film Festival with Star Unveils the Films and talent lineup for its 19th edition ! Over 220 films, 49 countries, 51 languages including features, documentaries, short films to be screened at the festival.

The Hungry, Mukkabaaz (The Brawler) & Omerta will Asia Premiere at the Festival The Jio MAMI 19th Mumbai Film Festival with Star is organized by Mumbai Academy of Moving Image (MAMI), a non-profit trust that aims to foster a culture of good cinema in the country by bringing the best of films and talent the world has to offer. The Festival announced its lineup, brimming over with 220 films, from 49 countries, filmed in 51 languages, at its annual press conference held today at JW Marriott, Juhu, Mumbai.

Like every year, Jio MAMI with Star will bring an exemplary slate of feature films from India and from the International film festival circuit to India, along with, Masterclasses and Conversations with standout film talent that will offer tremendous value to the audience and participants. The Festival runs from
12th – 18th October 2017 across 7 prominent venues in Mumbai. The curtain opens on the festival on the 12th of October with Anurag Kashyap’s film Mukkabaaz (The Brawler), at the iconic Liberty Cinema.
The line-up was announced by members of the MAMI board Anurag Kashyap, Siddharth Roy Kapur, Ajay Bijli, Kaustubh Dhavse, Rohan Sippy and the core team of the Academy Co- chairperson Kiran Rao, Festival Director Anupama Chopra, and Creative Director Smriti Kiran. 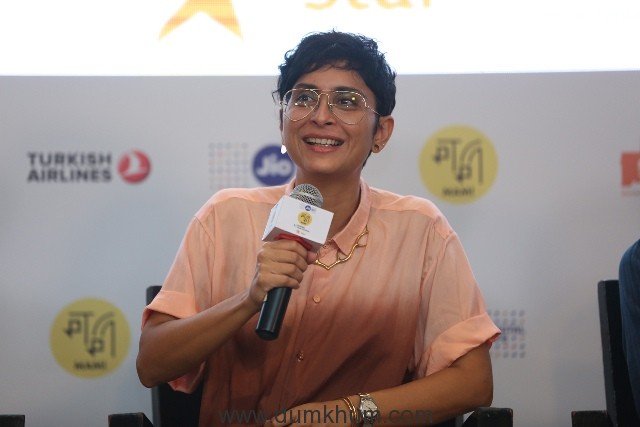 Jio MAMI with Star, Festival Co-chairperson, Ms. Kiran Rao said, “ This year our attempt has been to go deeper, to strengthen and consolidate our programming that we have created over the last two years rather than spread ourselves horizontally. Our endeavor is to change and shape the cinema
around us, in the city and to do that we have to engage more deeply in order to that we have started an year round programme which really has been a great success, we have had 24 events since the year began and all of them have been well attended. The masterclasses, workshops, in-depth conversations with
filmmakers have added a great deal to peoples’ engagement with cinema through the year and also it helped the academy become not just once a year presence but a continuing sustained conversation with our audiences.” As usual, the festival will host filmmakers from around the world. One of the aims of the festival is to get as many voices out there from diverse cinema cultures as possible and therefore countries that have had a rare presence at MAMI like Uganda, Kyrgyzstan, Slovenia, Senegal and Iceland have films
playing at the festival this year. Jio MAMI 19th Mumbai Film Festival with Star received over 850 entries for the movies. The Programmers, curators, selection committee members picked a diverse slate of films. 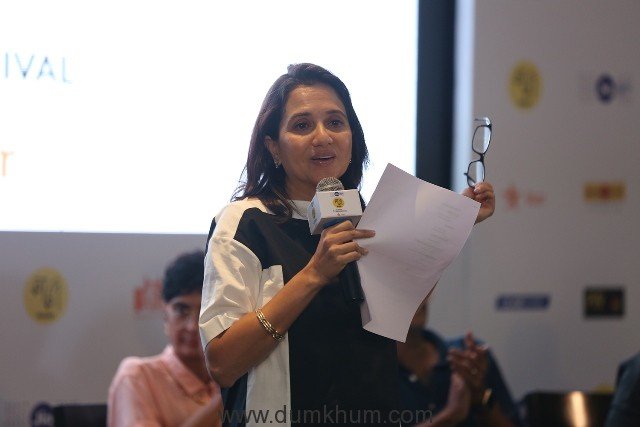 Commenting on the Jio MAMI with Star, Festival Director, Ms. Anupama Chopra said, “ It’s been an honour to be a part of this Festival. I’d like to take this opportunity to thank all the wonderful partners for their unparalleled support without which we wouldn’t have been able to put up such an
amazing line-up all through the year. I strongly believe that good films make us into better people and I am confident that the Festival will bridge gaps between cultures and communities world over.” Joint Secretary & Officer on Special Duty (OSD) to the Chief Minister of Maharashtra, Kaustubh Dhavse said, “Government of Maharashtra has been associated with the Jio MAMI festival for the third year now, Our endeavor has always been to encourage and facilitate large organizations of such cultural festivals, especially when it comes to movies because Mumbai is the film capital or the cultural capital of the country and we have significant amount of talent both in the Hindi and Marathi film industry which resides here. We will continue lending all the support possible in order
to make sure that this becomes the primary destination of fantastic worldwide cinema globally. It also is a very important year for the state because this is the Visit Maharashtra year, so it perfectly coincides with the year being an encouraging year for the travellers from across the world to come and see the
beauty and the heritage and the culture of Maharashtra and this particular festival adds a one more important stop for the global traveller to visit Maharashtra and see its true beauty.” Board member & Director Mr. Anurag Kashyap whose film also opens the festival this year said, “I am not only excited but elated that Mukkabaaz has been chosen to open at Jio MAMI Mumbai Film Festival with Star. I think MAMI is a great platform for filmmakers across the city and the country.
MAMI has really transformed a lot of fortunes, especially for the regional first time Indian filmmakers. MAMI has such an incredible list of movies world over and most importantly it gives people a chance to discover these amazing films at MAMI. With so much talent and cinema that comes down to India,
MAMI becomes that one place where everyone can catch up on their film binge-watching of international and Indian cinema.” Speaking on the occasion Director Mr. Rohan Sippy said, “I think MAMI year round programme is fantastic. It’s nice to see something that what we envisioned a couple of years ago with Anupama, Kiran and Smriti and the fact that it has kicked in really well. It is also important to connect with the
audiences through the year as the year round programme has been a lovely plaform to connect with the audience and build up the momentum and bring them out in larger numbers during the festival. I am happy to see that the Word to Screen brings publishers, writers and producers together, which is a great
initiative. The Filmamakers Bootcamp is another great step that becomes the fertile ground for the next generation of filmmakers – MAMI will keep ploughing the fields, so that we have wonderful stories from the next generation of storytellers.” The academy went year round this year and has been bringing latest cutting edge Indian and International cinema to the city every week as a run up to Jio MAMI Mumbai Film Festival with Star that will flood the city with a plethora of remarkable movies and talent. The India Gold category that screens the best of Indian films in Indian languages like Konkani, Nepali, Chokri. The International Competition will bring 12 debut feature films from Colombia, Georgia, Spain, South Africa, Iceland, Turkey, France
and the UK.
Commenting on 19th edition of MAMI Mumbai Film Festival, Uday Shankar, Chairman and CEO, Star said, “MAMI is a veritable treat for film aficionados of Mumbai. This festival offering the very best of Indian and world cinema showcases stories that inspire a billion imaginations. On the fourth year of an immensely fulfilling Star MAMI partnership we look forward to a very successful edition of the Mumbai Film Festival.” Jio MAMI with Star, Creative Director, Smriti Kiran said, “The idea behind the academy and the festival is to create value and not just tick boxes. To fill chasms and build bridges where currently there are none. We want to revive the culture of conversation by offering the audience the opportunity to engage with an array of filmmakers while highlighting different aspects of filmmaking. This year, we have deepened the engagement and strengthened our verticals through the Year Round Programme. I’m really excited and I am convinced that it’s going to be really fun and accessible to every movie-lover and I urge each and everyone to visit the festival and immerse themselves in the movie-mania.” Talking about the PVR MAMI partnership; Mr. Ajay Bijli, Chairman and Managing Director, PVR Ltd. said “It is a great honor to be a part of such a prestigious event. What makes this evening more special for us is the journey that both the brands, MAMI and PVR started in the year 1997. Both the
festival and our brand were conceptualized with an endeavor to inculcate good cinema among Indian audiences. With each passing year, this festival has immensely grown larger than life, providing a spectacular platform for the cinema lovers.” In its 19th edition, the festival will not only showcase Indian films but it promises to delve into the realms of providing the best in world cinema.

Siddharth Roy Kapur, Member MAMI Board of Trustees, said, “This festival is all about positive and creative energies coming together from Kiran, Anupama and Smriti, who actually run the festival and to all the board of members and trustees who are responsible for providing all the support to the
creative community, in the city and around the rest of the country. Its incredible to see the strides that MAMI has made in the last couple of years. I would like to congratulate the entire MAMI team and I want them to know that they will always have my support.”

The Jio MAMI Mumbai Film Festival with Star is an inclusive movie feast. We showcase the latest cutting-edge, independent cinema – art house fare alongside genre movies from Bollywood and Hollywood and cult international movies. We offer the best of world cinema to the people of Mumbai and we offer the best of Indian cinema to the world. The festival is run by the Mumbai Academy of Moving Image popularly known as MAMI. This is a space where
we revel in the sheer pleasure of cinema, the joy it gives us and how much it enhances our lives. The goal is to nurture and ignite a passion for movies. We want Jio MAMI to be shorthand for excellence in cinema.

Jio MAMI Film Festival
Mumbai – the financial capital of India is also the epicentre of the Indian film industry. The city plays such a major role in production and dissemination of Indian films and television programs that it is widely known by its acronym ‘Bollywood’. In 1997, a group of film industry stalwarts headed by late Hrishikesh Mukherjee founded the Mumbai Academy of Moving Image (MAMI) as a not-for-profit Trust. Their main objective was to organise an annual
International Film Festival which the film industry and the country could be proud of. MAMI has been organising the festival for the last 16 years and aims to foster a climate of good cinema. MAMI engages people from all walks of life across the city and country that enjoy and love good cinema. It is Mumbai’s only film festival that is entirely created and run by film professionals and a group of members from corporate India. Appreciation of good cinema, stripped
off all the limiting labels of art and commercial, can only come about through exposure to the best of films the world has to offer. The Festival is the first step in that direction.
In their Mission Statement in 1997, the MAMI Board of Trustees said, “We feel it is the need of the hour to disseminate and inculcate good cinema among Indian audiences. The only way to achieve this is to celebrate cinema by hosting an International Film Festival in Mumbai, India’s film and entertainment capital. MAMI (Mumbai Academy of Moving Image) is committed to start Mumbai’s first independent international film festival organized by
practicing film makers.”
Jio MAMI is glad to reach movie lovers through JioChat. Follow our official channel “Jio MAMI” on JioChat for
regular updates and exclusive content.