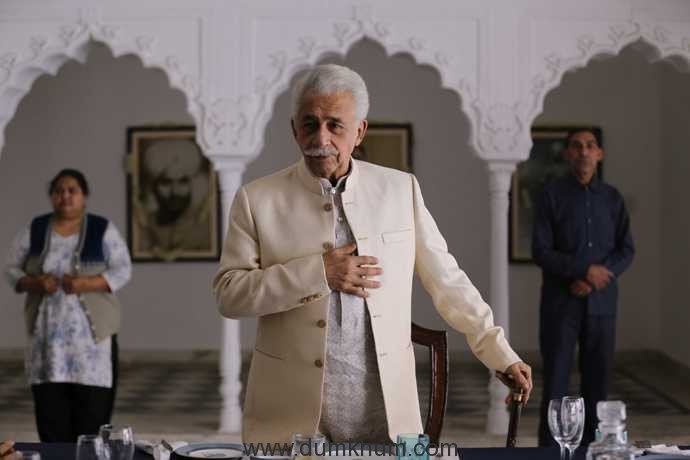 ‘The Hungry’, a contemporary retelling of Shakespeare’s Titus Andronicus,will premiere at the 42nd Toronto International Film Festival. The film is a bold new adaptation that tells the story of a vengeful mother at the lavish wedding of two wealthy families, updating the original play’s themes of corruption, greed and revenge for a global audience.

A rare example of an Indo-UK co-production, the revenge thriller is being delivered by Film London and Cinestaan Film Company using the former’s filmmaking scheme, Microwave as its model. The film has brought together filmmaking talent from India and the UK, key to which was a rigorous selection and training programme funded by The British Council.

The Hungry has a stunning international cast that includes Naseeruddin Shah (Monsoon Wedding, The League of Extraordinary Gentlemen), Tisca Chopra (24 India, Like Stars on Earth, Qissa: The Tale of a Lonely Ghost), Arjun Gupta (How to Get Away with Murder, Nurse Jackie, Bridge and Tunnel), Neeraj Kabi (Viceroy’s House, Talvar, Ship of Theseus), Sayani Gupta (Margarita with a Straw, Fan, Parched) and Antonio Aakeel (City of Tiny Lights, Skins). The film is written and directed by Bornila Chatterjee (Lets Be Out, The Sun is Shining) and co-written and produced by Tanaji Dasgupta (Chittagong, Sold) and Kurban Kassan (The Party, 20,000 Days on Earth, Ginger and Rosa). This is Bornila’s directorial debut.

Rohit Khattar, Chairman of Cinestaan Film Company, said, “The Hungry being selected to premiere at TIFF, a festival dedicated to presenting the best of international cinema, is a very fulfilling moment for us. I congratulate Bornila and the entire cast and crew and thank Film London as well as my amazing team at Cinestaan Film Company and C International Sales. We do hope our wonderful experience with The Hungry shall encourage others to explore such international collaborations as this is what truly makes storytelling a universal process.”

Adrian Wootton, Chief Executive of Film London and the British Film Commission, said, “Film London is very proud and pleased alongside Cinestaan to have been part of the commission and creation of The Hungry and to see this talented group of filmmakers realise their unique vision of Shakespeare. Toronto is one of the most prestigious and influential film festivals in the world so it a terrific achievement that The Hungry has been invited to Premiere there and we are very excited to see the audiences reaction in such a great cinematic environment.”