Launches a 15-year campaign to mobilize social change in India

Announces the inaugural Global Citizen Festival India to be hosted on 19 November at the MMRDA grounds , Mumbai

FREE TICKETS can be earned by taking part in the Festival Action Journey on www.globalcitizen.in 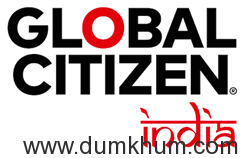 The inaugural Global Citizen Festival India is presented by COLORSViacom18. The festival is being produced by Wizcraft International and enjoys a strategic partnership with the Viacom18 Group and the Times of India Group.

Starting today, free tickets to the festival can be earned through the new online platform,www.globalcitizen.in, by signing up to become a Global Citizen and completing the festival’s Action Journey. In its first year, Global Citizen India will offer a wide cross-section of content and actions focused on creating meaningful impact in three key areas: Quality Education, Gender Equality, and Clean Water & Sanitation. Achieving impact across these interlinked issues is a critical first step on the journey to focus positive pressure on major players to influence dialogue, policy and social change in India. One of the first actions people can take is to call on their Chief Ministers to adopt a comprehensive action plan to achieve the Global Goals. So far, only one state has adopted a framework to act upon these Goals.

Shiv Khemka, Chairman, The Global Education and Leadership Foundation (tGELF)believes that India and its 800 million young people must play a vital role in the mission to achieve the Global Goals: “Young people are starting to engage with the challenges facing our country and the planet, and are becoming increasingly committed to taking action for social change. TGELF’s mission is to nurture and support ethical, altruistic and decisive leadership amongst young people at schools and colleges. Each one of us is responsible for our actions and the power of each action taken collectively can help achieve the global goals.”

“The years I spent living and working in India as a teenager were a key catalyst of my passion for challenging the status quo of poverty alleviation. So bringing the Global Citizen movement to India is a moment many years in the making. Sixty-five percent of India’s population is under the age of 35 – that’s 800 million young people who can drive serious change for generations to come. Global Citizen India will engage these young people to drive behavioural change at scale through their individual actions, impact policy through commitments by governments, and amplify India’s voice to the world in its commitment to achieving the Global Goals for Sustainable Development.” – Hugh Evans, CEO, Global Citizen

The Government of Maharashtra is the host partner for the inaugural Global Citizen Festival India, and the Hon’ble Chief Minister Shri Devendra Fadnavis has extended his complete support to the initiative:

“Global Citizen is an important initiative given its ability to engage citizens and engage them in crucial issues. The Global Education and Leadership Foundation’s focus on ethical altruistic leadership is important work that involves investing in our demographic dividend. The synergy of these promises exciting outcomes. The power of a digital India is unmatched. Connected individuals can amplify their collective voice and express their views on critical issues that people across the country face. The commitments raised over the last 5 editions of the festival are remarkable and the work done to get citizens to take action is unique. I believe this is an interesting night an innovative approach to achieve important goals. Maharashtra looks forward to lead this movement across India. We are proud to bring this initiative to the country and be the voice of India to the world.”

Poonam Mahajan, Member of Parliament said, “As a Mumbaikar, I am pleased to welcome Global Citizen to Mumbai, the home of entertainment and popular culture. The confluence of popular culture, ethical leadership and public policy will add more power to the voice of young India. It will drive responsible decision making. As a cosmopolitan city, Mumbai brings diverse people together. This unique movement will add to the vibrancy of our city and help Mumbai and Maharashtra lead the efforts to drive meaningful change across the country.  Mumbai has always been India’s gateway to the world and it is only natural that it takes the lead in ensuring India is committed to achieving the Global Goals. Only collaborative action at scale can help improve the planet for future generations.”

Commenting on Viacom18’s strategic partnership with tGELF, Sudhanshu Vats, Group CEO, Viacom18,said, “India is at a powerful confluence in its history. We are one of the oldest civilizations with one of the youngest populations in the world. As we work to realize our Honorable PM Shri Narendra Modiji’s vision of India emerging as the Vishwa Guru in the 21st century, it becomes imperative for us to work with all sections of society. Viacom18, as an organization with a heart, is committed to harnessing the power of partnerships to realize this dream. Our support to tGELF is a natural extension of our work and purpose and I hope to amplify the messages around the causes of Quality Education, Gender Equality and Clean water & sanitation with this initiative.”

Speaking at the launch event, Mr Yuri Afanasiev, UN Resident Coordinator and UNDP Resident Representative in India said: “Technology is making our world more citizen-centric and connected than we could have ever imagined. Success of the SDG agenda over the next 15 years is predicated on active, constructive, solution oriented engagement by citizens across the globe and in India, if we are to fulfil the promise of “leave no one behind.”

Amitabh Bachchan said “It is a great honour to see the words of our Hon. Prime Minister Modi at Global Citizen Festival in New York coming to light with the first edition of Global Citizen taking place in India.  It is both a pleasure and honour for me to support this campaign that creates a momentum, connecting individuals globally to work together and bring about change and eradicate poverty.”

Aamir Khan urged people to follow his lead in taking their first Action Journey on GlobalCitizen.in: “I am so pleased to see an initiative like Global Citizen coming to India and it is an absolute honour to participate in the Global Citizen India Festival in its premiere year. This is a great social action platform that brings people together to support the UN Global Goals to eradicate poverty, not only in India but around the world. I am very delighted to lend my support to Global Citizen India’s Shuruaat Hoon Main Action Journey that endeavours to create a people’s movement for the betterment of our country and its citizens.”

Farhan Akhtar commented: “I am excited to be a part of the inaugural edition as India joins the Global Citizen movement. This is a great way to contribute collectively and take action to deliver change with full commitment. As a socially conscious individual and as a founder of Men Against Rape and Discrimination (M.A.R.D), I am glad to be a part of this movement to support the Global Goals to help make a difference.”

Kareena Kapoor Khan said: “As a Global Citizen this is a great opportunity to pledge my support, and connect with millions of people in India and globally through this Global Citizen India platform to address the various issues and eradicate extreme poverty by 2030. We are a nation driven by youth, so value based education and school curriculum plays an important factor in spreading this message & raising awareness in universities about the Global Goals for Sustainable Development and the fact that we all have the power to be a part of this movement and take action.”

Viacom18 will be leveraging its foremost brands across all platforms to promote the inaugural festival. While the network will use its popular channels and digital platform to promote the festival, COLORS, MTV, Vh1, COLORS Infinity and Voot will be airing the festival on their respective platforms. The Times of India Group and the Times TV Network will be leveraging the group’s print, internet and television platforms to highlight and showcase both the magic and the success of the Global Citizen India initiatives.

Google India through its Internet Saathi programme has been empowering women through technology based solutions to bridge the digital gap in rural India. Google is partnering the Global Citizen India initiative to address the issues of Gender Equality and women’s empowerment.

UPL’s partnership is focused on showcasing its vision to be a catalyst for a more equitable and inclusive society by supporting long-term sustainable transformation and social integration.

Wizcraft commenting on the association, Sabbas Joseph, Founder-Director Wizcraft International Entertainment Pvt. Ltd., said, “Global Citizen India movement is the first such platform wherein popular culture meets public policy. Empowered by youth it is a platform for key influencers to respond to voices of millions of people committed to making a positive impact. It is particularly exciting to work alongside the young inspired tGELF team to mobilise influencers from the government, corporate sector, non-profits and the Entertainment Industry to join the campaign. We are especially pleased to showcase the coming together of India’s most powerful entertainers with the world’s most influential policy makers.”

People across India are invited to sign-up, take actions, and enter the prize draws for their tickets. More than eighty percent of the tickets to the festival will be given out to Global Citizens who earn them by taking action. For more information about the artists, schedules, and event, please visitwww.globalcitizen.in and follow @glblctznIN on Twitter and Facebook, and on Instagram using #GlobalCitizenIndia.

80% of the tickets would be free to earn through Action Journeys.

Limited Tickets would be available at BookMyShow from September 15, 2016 at 12 noon.

Global Citizen is a social action platform for a millennial generation that wants to solve the world’s biggest challenges. On the platform Global Citizens can learn about issues, take action on what matters most and join a community committed to social change. We believe we can end extreme poverty by 2030, because of the collective actions of global citizens across the world. Over the last five years, Global Citizens around the world have taken over six million actions to solve the world’s biggest challenges. To date, the actions by our global community have resulted in 120 commitments and policy announcements from leaders, including financial aid valued at over $25 billion that will directly impact the lives of 656 million people.

About The Global Education and Leadership Foundation

The Global Education and Leadership Foundation (tGELF) is focused on cultivating ethical, altruistic leadership to improve the state of the planet through collective action. Its programme currently reaches over 2.5 million students in 14 countries and it has trained close to 100,000 teachers.