In his career span since 1980’s, Priyadarshan has churned out more than
64 films as a director-so indeed this feat of his can be termed as Tezz i.e.
the speed at which he makes films year in year out, else this film has no
relevance with the title Tezz as such. It’s more of chase, chase and more
chases!!!
We saw Priyadarshan last film in 2010, that was Aakrosh,
which did get some critical acclaim, but this film which is shot completely,
from start to finish in UK seems to have lost the track. The basic premise of
the film ie.Ajay Devgan (Aakash Rana) an Engineer, is an illegal immigrant
staying in London & working on permits not valid, falls in love with a rich
girl of Indian origin in UK & marries her against her rich millionaire fathers
wishes & in the process gets deprived of her father’s fortunes. On one such
surprise raid by immigrant department he is caught and deported back to
India. Now after 4 years he returns & he plans a vengeance of his own kind
by planting a bomb on London Glasgow train with the help of his former
staff, also illegal immigrants, Aadil Khan (Zayed khan) & Megha (Sameera
Reddy).

What follows is a call to the railway centre in UK, about the bomb &
subsequent demand for 10 million Euros as ransom money. Now how this
operation relates to his revenge saga is anybody’s call. All this because he
was denied legal status and an honorable stay in London!
Now operation ‘Diffuse the Bomb’’ starts, and there is sufficient time of 12
hrs from London to reach Glasgow, but the only hitch is that the train should
maintain the speed limit above 60 miles per hour, or else the bomb blasts!
Sanjay Raina, (Boman Irani) who is Railway traffic controller is in the office
with his team working out the possibilities, against all odds and the fact that

his daughter is also traveling by the same train.
Now its anybody’s guess as how one can control all the trains on London
Glasgow belt for 12 hrs & then those mindless chase sequences, first
involving Megha (Sameera reddy) on her bike & the Aadil (Zayed) who
keeps on jumping, running, doing Somersaults like you must have seen in
dozens of Jackie Chan films, doing acrobatics & dodging the best trained
police of London. Our main counter terrorist officer Arjun Khanna (Anil
Kapoor) is after the bomber & still could not catch him. And mind well
these people are just plain illegal immigrants & not any terrorists or trained
commandos-plain ordinary people & you see them doing unthinkable
stunts & without any scratch on them. Now there are many such illogical
highpoints which you just have to sit through. All Marks to brilliant stunts
choreographed by Gareth Milne (Bourne identity, Bourne Ultimatum), and
coordinated by Hollywood Action Director Peter Pedrero who is really class
apart. And equally well picturised by cameraman Tirru S. Rahat Fateh Ali
Khan’s number “TERE Bina Ji Nahin Lagta” adds that flavor of romance for
those rare moments where Aakash and Nikita are together. Ajay Devgan and
Anil Kapoor are their usual self, all serious and involved. Whereas Boman
Irani, Mohanlal, Kangana Ranaut, Zayed Khan and Sameera Reddy put in
their might into the characters etched out for them. Last but not the least
Mallika Sherwat’s item number would have provided the much needed relief
had it come somewhere in between the whole film scenario. Only if the story
and the content were well researched, this 40 crores extravaganza would
have been a different ball game altogether.
You will really relish this fare if you stop thinking & flow with the
action & thriller drama! 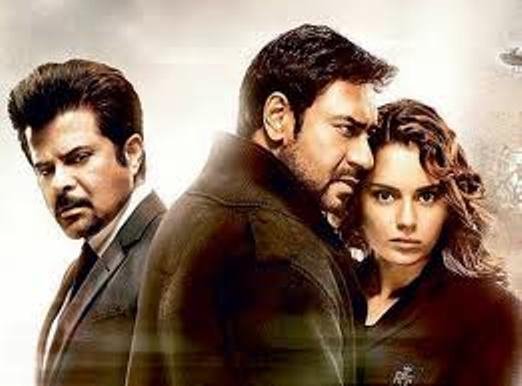