Teachmint, an education infrastructure startup and the creator of India’s largest teaching platform, today launched its brand new campaign featuring bollywood superstar Anil Kapoor. Centered around the idea of ‘Naye Zamane ki Nayi Schooling’, the all new ad campaign decodes what makes a school truly digital in today’s world and how digitization can empower schools and teachers, thereby benefiting the learning opportunities and experiences of students.

Anil Kapoor and Teachmint join hands in this new campaign to drive awareness and adoption for Teachmint’s recently launched offering called ‘Teachmint for Institute’ which helps educational institutes digitize their classrooms and operations within minutes. Today, over 4000+ institutes in India use Teachmint’s state-of-the-art learning management system as they strengthen their digital infrastructure or move to a hybrid teaching model. This digital ad film sees Anil Kapoor play the role of a school principal who is experiencing the benefits of having digitized his entire school. The film begins with him establishing the fact that true digitization goes beyond just conducting “live classes”, it takes place when you automate your operations and allow your teachers to focus on what they love doing – teaching. The film also highlights Teachmint for Institute’s most sought-after features like automated test generation & correction, classroom recordings as well as end-to-end institute management which enables principals and admins to significantly boost efficiency by automating several mundane, manual processes. Announcing the launch of this new campaign, Divyansh Bordia, COO & Co-Founder, Teachmint, said, “We have witnessed unprecedented growth in just 17 months since launching Teachmint and this campaign marks a new milestone in our journey of building a state-of-the-art infrastructure for education. Teachmint was launched to empower educators to truly thrive in the ‘Naya Zamaana’ by helping them digitize their classrooms without any hassle. With this new campaign, we take this up a notch by introducing an offering to help an entire institute digitize within minutes – Teachmint for Institute. We are extremely excited to collaborate with Anil Kapoor and are confident that this partnership will help us reach out to a larger audience, connect with educational institutes and help them become more aware about the benefits of end-to-end digitization.” 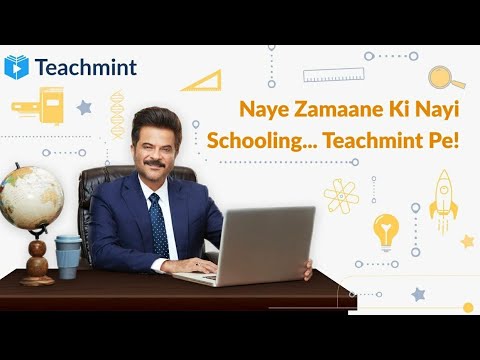 On being a part of this campaign, Anil Kapoor said, “I am delighted to be associated with Teachmint, not just as an actor but also as a strong advocate of the power of education. Tech-enablement in education will play an integral role in building the future of our nation and it’s heartening to see a young company like Teachmint revolutionize this experience for educators, schools and institutes.”

This is Teachmint’s second significant celebrity collaboration in 2021. The company had launched its first large marketing campaign with Rajkummar Rao in April 2021 to drive awareness and adoption of its mobile-first teaching platform. Since then, Teachmint has witnessed unprecedented adoption from the educator community and ranked as the top education app in India on Google Play Store.

Teachmint is an education infrastructure provider and India’s largest live teaching platform. It was founded in May 2020 by Mihir Gupta, Payoj Jain, Divyansh Bordia and Anshuman Kumar – alumni of IIT Bombay and IIT Delhi with executive experience at OYO, McKinsey, Swiggy and Roposo. The company is reimagining the infrastructure for education through their proprietary classroom technology, which is highly optimized for education providers across the world, including individual teachers, schools, universities and edtech organizations.

Through Teachmint’s classroom infrastructure, teachers are able to deliver live online classes, ensure continuous student engagement and automate their admin workflows. The platform is available in 11 different vernacular languages including Hindi, Telugu, Tamil and Punjabi. Within a year of its launch, Teachmint is now the largest live teaching platform in the world (outside of China) with 10 million+ teachers & students from 5,000+ cities on its platform.