Taapsee Pannu, who debuted opposite Dhanush in the super hit and National award winning film ‘Aadukalam’, has made her presence felt strongly in the film industry, down South. The young actor recently received the ‘Enthusiastic Performer-Female’ jury award at Edison Awards 2014 for her performance in the Vishnuvardhan directed Tamil film, ‘Arrambam’.

The actress was ecstatic, as she received the award in a beautiful yellow gown, designed by Gaurang. Looking gorgeous in the vibrant ensemble, Taapsee seemed to be quite the show-
stealer. The dimpled-beauty was visibly humbled by the love and the accolades she received for her debut award in Kollywood. Sharing her delight, the actor said, “I couldn’t have asked for
more. It is great to be appreciated, and see your work being recognized. The award encourages me to work harder and give better performances. I would like to thank everyone, with all my heart, who has helped me pave my path in the film industry, as well as my audience who have given me a place in their hearts.” 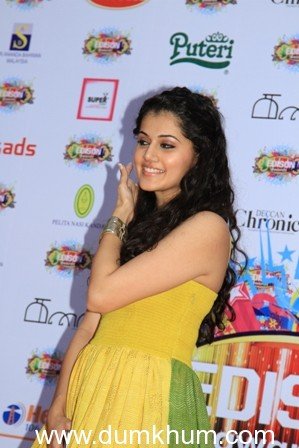 Taapsee made a spectacular Bollywood debut last year in David Dhawan’s directorial venture ‘Chashme Baddoor’, and will be seen next in ‘RunningShaadi.com’ with Amit Sadh.