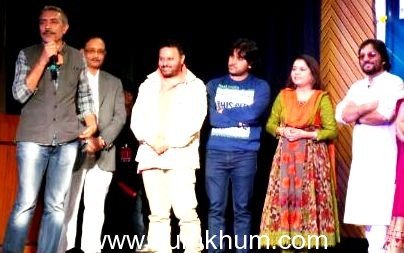 The videos are directed by Atul Gupta.

Rarely we come across such people who, even while discharging their duties efficiently on responsible Govt. posts, are still able to keep alive the artist within. Mr. Ajit Sinha is one such wonder who penned the lyrics for such soothing songs. His first collection of poetry ‘LE CHALO USS PAAR’ was received well in the literary world. It was during the creation of his second book ‘POOJA KAROON YA PYAR KAROON’, that Swing Media Spectrum recognized the potential of his poetry and hit upon the idea of translating his poetry into a musical work – an audio-visual extravaganza of songs and videos! On this occasion, music arranger Kapil Gupta who has worked with stalwart music composers said, “The real challenge in the music arrangement of these songs was to match the depth and timelessness of the lyrics in the orchestration as well, with a totally new sound design that would be contemporary, yet not compromising the classy expression of the lyrics! Something equally appealing to all the classes and generations.” Director Atul Gupta, who has many music videos, animation and corporate films for the MNCs to his credit said, “Making the videos of these songs was a ‘never-before’ experience for me. The amalgamation of lyrics, with all the unique fragrances of lovely emotions coming straight from the lyricist’s heart and the rich music became very demanding visually. But this challenge turned into a creative pleasure as the lyrics themselves suggested the visuals and the music led to the shot divisions and cuts.”

The audio CDs and DVDs of these two music albums are available on all leading music stores worldwide.