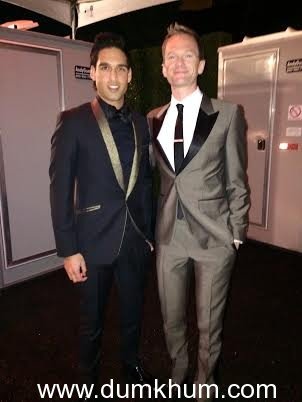 Elton John’s annual party definitely has one of the best guest lists, and the 2014 bash didn’t disappoint!

Joining the list this year for the Elton John AIDS Foundation Academy Award Party was none other than our very own Sid Mallya. Other invitees included Heidi Klum, Donatella Versace, Dave Franco, Vanessa Hudgens, Jane Fonda, The Kardasian sisters among many others. Sid, in fact, caught up with one of his favourite actors : Neil Patrick Harris : Barney of the sitcom How I Met Your Mother. Sid is currently in LA looking at pursuing opportunities in Hollywood.

Hosted by Sir Elton John and the AIDS Foundation, it is one of the most high-profile parties in the Hollywood ever since it was first hosted in LA in 1993. The annual party contributes to the foundation fund by its high priced ticket sales which are given by invitation only and a celebrity auction.