Defending champions Lynghkoi Binning and Lalita Babbar will lead the Indian elite fields for the full marathon, among the men and women respectively, in the 11th Standard Chartered Mumbai Marathon to be flagged off from CST on Sunday, January 19, 2014.

The event, Asia’s biggest marathon has attracted the cream of India’s long distance runners, all vying for a piece of the overall prize money as well as separate Indian prize fund, which will see the Indian full marathon winners getting richer by Rs 5 lakh each. 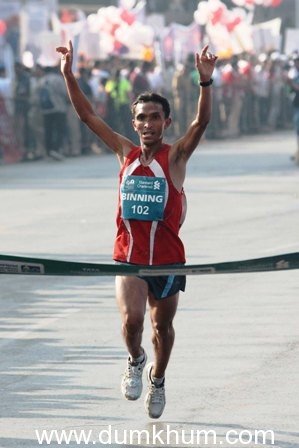 Binning, a three-time winner here will face opposition from the fastest athlete in the field, Ram Singh Yadav, returning after a one-year break. Ram Singh, who clocked 2:16.59 in 2012, to also qualify for the London Olympics, has run sparingly last year, preparing for this event and will be the surprise package on Sunday as he aims to better his personal best. Binning, who won in 201, 20111 and 2013, has a fastest time of 2:20.12 on this course and he too is looking to better his time and get close to his personal best of 2:17.33. The other big names in the fray are Elam Singh of ASI, Pune, who has a PB of 2:18.27, Karan Singh, V L Dangi and Budha Ram, all capable of running below 2:21. Sanvroo Yadav, who ran a strong race while winning the Vasai Virar Marathon in October with a time of 2:21, is also among the contenders and so are Arvind Kumar Yadav and K C Ramu.

A total of 28 elite Indian full marathoners will take the starter’s flag.

The women’s full marathon has been dominated by Lalita Babbar for the last two years and she will be aiming for a hat-trick as she lines up on Sunday. Babbar will face competition from Vijay Mala Patil and Rohini Raut, who finished second and third, respectively, last year. The women’s field also has names like Neelam Rajput, Bhagwati Devi, Anisa Devi and M Sudha, among others, while making their debut will be Manisha Salunkhe, Rashmi Gurnule and Supriya Patil.

The man’s half marathon also has a strong Indian contingent, with 2012 winner Shoji Mathew, BC Tilak, Indrajeet Patel, Yogesh Sardesai, Ajay Bir Singh and Vishram Meena among the contenders.

In the women’s half marathon, the battle is expected to be between Sudha Singh and Kavita Raut, with Monika Raut, Swati Gadhwe and Seema the other notable names in the fray.