Stop The Fight: Message from the Singing Sensation Daler Mehndi ! 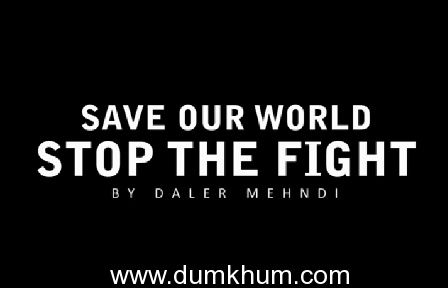 This World Music Day, King of Bhangra Daler Mehndi has come out with an exclusive new track titled “Stop the Fight–Lakhon Hue Fanaah” that promises to capture the audience hearts. The melodious composition with its heart-rending lyrics is the musician’s own brain child. With this latest composition, he his making an attempt to share the message of love and harmony amongst his fans and followers, bringing about a change through the language of music. The conceptualisation of this song has an interesting story to it.  Last night as his engineer was busy mastering Gurbani tracks, Daler Mehndi dropped into the studio and thought about creating this magic. He authored and dubbed the song in one go. The song wasn’t penned on a paper, he just kept singing the words straight from his heart, coming together as a song.The new track urges people to cherish the planet, save it and to stop fighting amongst themselves. The lyrics of this song are strong and powerful asking God to have mercy on his children.

Daler Mehndi is an Indian pop icon known for his energetic dance songs, his distinctive power pitched voice, bejeweled turban and long flowing robes. He is often referred to as the father of the Indian pop industry. Since 1995, he has recorded several albums in India and been a playback singer for several blockbuster Hindi movies.