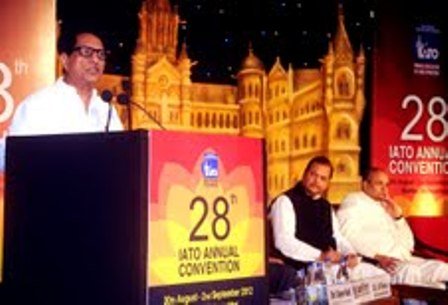 Following is the text of Civil Aviation Minister Shri Ajit Singh’s address at the 28th annual convocation of Indian Association of Tour Operators (IATO) in Mumbai.

It gives me great pleasure to be associated with the Indian Association of Tour Operators at the valedictory function of their 28th Annual Convention.

You all are aware that like civil aviation sector, tourism is an important service sector in the economy. It plays an important role in the economic development and creation of jobs in India. During 2011, Foreign Tourist Arrivals in India were 6.29 million, with a growth of 8.9% over 2010, which is double the growth rate in this sector worldwide (4.4%).  The foreign exchange earnings from the tourism in India during 2011 were 16.56 billion dollars as compared to 14.19 billion dollars in 2010, which registered a growth of 16.7%.  Tourism value addition accounts for 2.78 per cent of the GDP in terms of direct contribution. In case indirect effects are also accounted for, the share of tourism in the GDP stands 5.83 per cent. In absolute terms tourism related jobs in India are estimated to be in the region of about 21 million in 2002-03 as per the Satellite Accounting Study of Tourism Ministry. However, employment in Indian Tourism Industry, inter-alia, is dependent on the aviation industry since 95% of the foreign visitors arrive by air.

I am happy that the Ministry of Tourism has recognised the great potential of tourism sector in the economic growth & employment generation and has prepared the strategies for tourism development during the 12th Plan which, inter-alia, include identification of major tourism circuits & destinations, development of tourist parks, identification of clusters of villages having unique craft & ethnic art form for development as tourism products. It is a matter of great satisfaction that Ministry of Tourism is trying hard in ensuring the convergence amongst various stakeholders to implement these strategies.

The growth of civil aviation sector & tourism sector are inter-dependent and complement & supplement each other. Till few years back Tourism Department was a part of the Ministry of Civil Aviation in the Government of India possibly because of this synergy. The most important contribution that Aviation makes to the economy is through catalytic impact on the performance of other sectors and as a facilitator of their growth and the best example can be seen in the growth of Tourism Industry.

Air Traffic Forecast carried out recently for the Working Group under National Transport Development Policy Committee has concluded that Domestic Air Traffic by scheduled carriers in India in 2020-21 is set to cross 159 million passengers as against 54 million in 2010-11 suggesting a growth of approximately 3 times the present traffic in 10 years.   International Passengers to and from India in 2021-21 is projected to be 92 million implying a growth of about 2.4 times the traffic in 2010-11.  These numbers of expected growth of Air Traffic in India have large implications for the tourism sector in India.

Regarding domestic tourism, my main worry is the lack of air-connectivity to remote & interior areas of the country having immense tourism potential including Tier-II & Tier-III cities in India. The new policy instrument in the form of Route Dispersal Guidelines is under active consideration of my Ministry which would mainly focus on the availability of air-connectivity to these areas and making the air travel affordable i.e. within the reach of common people. We are also proposing to create an Essential Air Services Fund for providing subsidy for development of low-cost airports with low-cost maintenance and other expenses, so as to encourage domestic airlines to fly on these remote interior routes having immense tourism potential. My Ministry is also in the process to enhance the present operations of helicopters and construction of heliports at various places to improve the connectivity of smaller places including places of religious & tourist importance with bigger cities. The Ministry would also soon modify guidelines for acquisition of aircrafts so that Indian carriers are encouraged to acquire smaller aircrafts much needed for providing connectivity to these smaller cities.

I would also like to share with you that 19 places which are important from pilgrimage/tourist point of view, have been identified in consultation with the Ministry of Tourism and it is proposed to connect these places not only with more airports but frequencies of affordable flights are also proposed to be enhanced.

You may be aware that the airlines industry is presently undergoing severe financial crisis. We have taken number of steps to address the financial issues of the airline industry which include direct import of Aviation Turbine Fuel by the airlines, reduction of VAT on ATF and to get the ATF declared as a notified product so as to bring it under the ambit of PNG Regulatory Board, allowing External Commercial Borrowings for working capital requirement of airline industry and various other concessions in the form of exemptions from custom duty on various items relevant to airline industry.  The issue of allowing FDI in airlines is also under active consideration of the Government.

We are also working to develop India as an International Hub for the international passengers and the Ministry of Civil Aviation has initiated action in this regard which includes revisiting the policies regarding Bilateral Air Service Agreements with different countries, rationalisation of all bilaterals and traffic entitlements on international routes to Indian carriers and allowing even smaller Indian carriers to fly abroad.

Besides the scheduled International Flights, there is a tremendous potential for International Charter Operations.  In other countries in the region, Tourist Operators and Airline companies are jointly offering innovative packages to promote International Tourism.  The cost of these packages to the consumer includes airfares, visa fees, hotel stay, airport transfers etc. and in many cases these packages also appear to be affordable.  I, therefore, urge the industries of tourism and airlines to come together to work out innovative packages to attract the category of budget travellers in overseas that are in very large number and announce them in advance to fully realise the in-bound tourism potential of India. The objective should be to provide more from less for more.

It has been assessed some time ago that to achieve an incremental level of 1 million visitors per year, the tourism industry will need to make an investment of approximately Rs.6,000 crores in hotels & related facilities besides the investments on the part of civil aviation sector.  Therefore, attracting investment to create the needed infrastructure for tourism is equally an important task.

Evidence available suggests that the inbound tourism potential that exists for India in its cultural diversity and a vast array of attractions have not been tapped at all.  There is a need for tourism industry, enterprises in the civil aviation sector and the Ministries/ Departments concerned, both at the Centre and in the States governing these sectors to come together to chalk-out strategies for realising the potential that exists in India.  Authorities in the State Governments should also realise that the economic spin-off of the growth in service sectors such as tourism and civil aviation, are much greater than the short-term revenue considerations which often guide them in framing tax policies.  Taxation of Aviation Turbine Fuel is a case in point. I would like to again emphasize that State Governments have a large role to play.  They must promote and market individual sites and locations among niche tourist segments in domestic and foreign markets. The industry should also be geared to meet the challenges of growth and my assurance is that the Ministry of Civil Aviation will be by your side in this endeavour.

In the end, I would like to convey my gratitude to the organisers of IATO and convey my best wishes for the growth and development of tourism sector in India.

Thank you and Jai Hind. “