Sony Music presents a first of its kind collaboration between Sony Music, a global music giant, brings you a unique first time collaboration between – the legendary A R Rahman and the multi-talented Kapil Sibal, Hon’ble Minister of Law & Justice and Communications & Information Technology, Government of India, in an album called ‘Raunaq’. Written by Mr. Kapil Sibal and composed by Mr. A R Rahman, the album is a conversation of music & poetry that takes you on a journey of varied emotions. A R Rahman has also played the role of a visual story teller and has conceived the narrative of the lead music video.

A grand event hosted by Sony Music did justice to the album and its splendor. The early evening saw singers from the album along with A R Rahman and Mr. Kapil Sibal arrive and walk through the red carpet. Encouraging Mr. Kapil Sibal on his new journey, his friends from different walks of life were seen at the event. A R Rahman’s friends from the industry also joined in the celebrations. 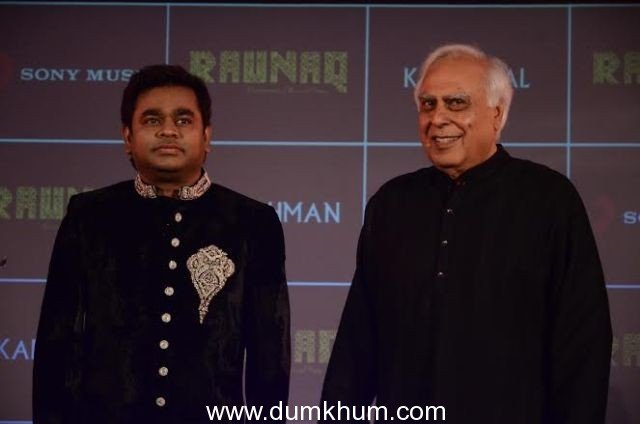 The album features 7 plus songs sung by the best artists from the music industry. India’s pride Bharat Ratna Awardee, Smt. Lata Mageshkar will be heard in the song ‘Laadli’ giving the album a much needed gravitas. Shreya Ghosal with her mellifluous voice steals your heart away in ‘Kismat se’. While Jonita Gandhi, the new singing sensation with her infectious voice makes the song ‘Aa Bhi Jaa’ memorable. A R Rahman’s voice is featured in ‘Laadli’ and ‘Boondein’ promising to make the album a must have!

Elaborating on the album, A R Rahman said, “Raunaq for me is a visual and musical space which I have been wanting to go on for a long time. After listening to Mr. Sibal’s lyrics, its simplicity took me to that place and since then I have been working on creating music keeping the lyrics in mind.” While Mr. Kapil Sibal, added, “Sensitive, aesthetic, and intuitive, is what AR Rahman is. He is totally immersed in music. Every element of his being is involved in creation – as he aspires for perfection in everything he does. Rahman’s genius gives life to my thoughts.”

Talking about this exclusive collaboration, Mr. Shridhar Subramaniam, President India and Middle East said, “We began our relationship with Rahman over 15 years ago with Vande Mataram and have worked with him on numerous record award winning projects since then. This new album has a very different feel as the sound is very simple and traditional melodies juxtaposed with a sparse yet modern soundscape.  Each song mesmerizes and is something like you have never heard before. This is Rahman’s genius.” He further added, “This album has also given us the opportunity to discover the versatility of Mr. Kapil Sibal whose heart wrenching lyrics will surprise you and its an honor for us to work with him”