Sonam Kapoor works around the clock to promote Khoobsurat despite being unwell. 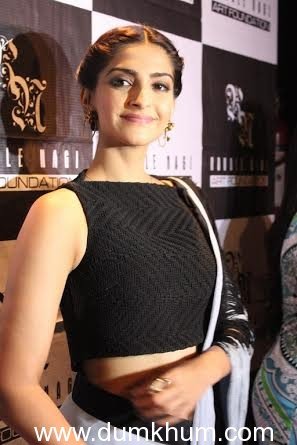 All eyes are on Sonam Kapoor as Khoobsurat, the country’s first official Disney film is scheduled to release 19th September .

The actress who is going all out to promote the film made her presence felt at various reality shows including Comedy Nights with Kapil and Entertainment Ke Liye Kuch Bhi Karega – What not many know is that Sonam who is currently also shooting for Prem Ratan Dhan Payo and dubbing for Khoobsurat, is taking time out and traveling most of the month to promote the film despite suffering from a  back problem.

Despite being advised complete bed rest by her doctor, Sonam being the professional that she is didn’t want the promotions of Khoobsurat to suffer and hence has been promoting and marketing the film under the supervision of her physician.

Confirming the news reveals a source from her doctor’s end, “Sonam Kapoor has been experiencing acute muscle spasms , and was advised rest but she was adamant on fulfilling her promotional commitments and didn’t want to take a break.Sonam is currently undergoing physiotherapy and continuing her professional duties