Sonam Kapoor  chose to wear a pretty white gown for the event. Infect, ‘Khoobsurat’ is one of Sonam’s favourite movies and she holds this remake very close to her heart. This fondness for the movie was evident at the event as well. Produced by Walt Disney Pictures in association with Anil Kapoor Film Company, ‘Khoobsurat’ is directed by Shashanka Ghosh and stars Sonam Kapoor & Fawad Khan in the lead roles. Khoobsurat received fabulous response from the audience and critics alike. 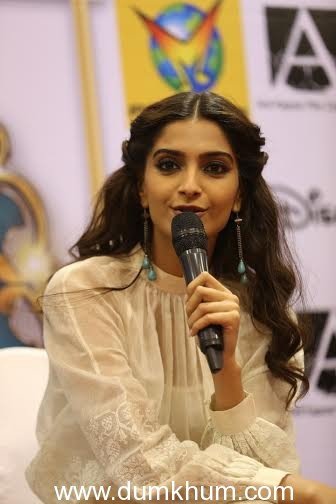 Sonam Kapoor was quoted, “Khoobsurat is one of my favourite movies and is very special to me. I am very happy with the response it had evoked during the release.”The star also expressed her grief over the recent Delhi rape case. Being vocal about the entire incident, she blamed the government due to lack of sense of security among women. Mr Sanjay Karwa, CEO, Planet M said, “We are glad to have the DVD launch of Khoobsurat happening at Planet M. We understand that the entertainment need of our present generation has revolutionized with the changing technologies and we are constantly in touch with their growing need for divergent experiences. Understanding the need of the human mind is a very interesting and intriguing task. It requires a lot of research to understand the likes and dislikes of a particular generation. Today’s generation is always looking out for stores which have everything under one roof.  We are beyond just music and movies now. So no matter what you want to see, listen or do, we have an option for you.” Planet M has over 54 outlets in over 13 cities. At Planet M you will find product ranging from varied segment. When you hop into a Planet M store, you could be sure that you are getting a top line range of titles and products, well selected by our in-house experts.

As a part of the $5 billion worth Videocon Group – a Fortune 500 company, Planet M rides on a commitment to quality. One can check out latest mobile phones at its mobile stores: Planet Mobile; to make learning fun and joyful, it has Li’l Planet M that offers toys; to experience gaming zones it has ‘Planet Play’. Planet M is everyone’s final fun destination. Think Planet M- Think FUN!

‘Khoobsurat’ is released on DVD & VCD formats by Relaince Home Video & Games to suit your home-viewing pleasure. It will be made available pan India across leading retail stores, including Crossword, Planet M, Landmark as well as e-commerce platforms like Flipkart and Amazon.