Sonakshi Sinha requests for a special dance number in R…Rajkumar 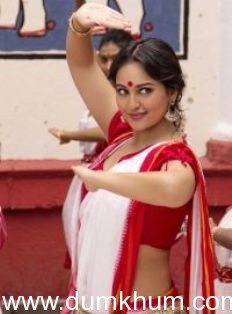 Sonakshi Sinha who will next be seen alongside Shahid Kapoor in Eros International & NextGen Films ‘ R…Rajkumar is extremely excited about working with her co-star and director Prabhu Dheva,both of whom are amongst the country’s greatest dancers.

The actress has requested the makers of the action entertainer,to include a special dance number with the 3 of them ,which will act as a promotional song for the film.

Confirming the news says producer Viki Rajani, “Sonakshi was keen on dancing with Prabhu Sir and Shahid in a special number…We think it’s a great idea and will take a final call on it in the next few days”.

Says Sonakshi Sinha, “I have been asking Prabhu sir to shoot for a music video featuring Shahid, himself and me for a while now. I think the three of us in a dance number would be an explosive combination. I hope it works out”.