The film “THE RED CORRIDOR” is a war, fought not with guns and bombs, but within peoples’ minds and hearts. A war of emotions between two opposing mind sets – The Common Man and The Extremist; “THE RED CORRIDOR” is the story of two people forced to share a part of their lives with each other. The unveiling and announcement of Film “THE RED CORRIDOR” was a lavish affair. A galaxy of silver screen’s brightest stars graced the occasion with their presence. The announcement of the film witnessed the obliging presence of the entire cast and crew. The specials guests for the evening were Prashant Sharma , Mr. Ashok Sharan, the Jharkand Ratan spoke a few words about the film and Jharkand, where a part of the film is slated to be shot. 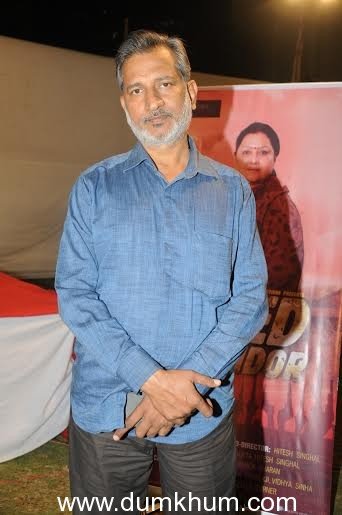 “We wanted to start our first venture under our banner with a subject that encompasses various emotions of human being, hence we chose “THE RED CORRIDOR”. The film also sends a message across to all our brothers and sisters who have taken up arms requesting them to think about the violent ways and means that they follow wherein precious human lives are lost.” Produced by: Rajaneesh Dasgupta and Hitesh Singhal; under the banner “THE RED CORRIDOR” emphasises the fact that emotions are universal and divisions are only in our own minds. Each Human has a positive side and a negative side. The differences in the mindsets of different factions of society can be bridged only through love, understanding and warmth. “THE RED CORRIDOR” attempts to bring this similarity of emotions to the fore front of each mind without differentiating the faction that any one belongs to.”