Simran Kaur Mundi will be seen playing Kapils first wife in his debut movie Kis Kisko Pyaar Karoon directed by Abbas Mustan. She plays an ex model in the movie and her character is that of a Punjabi Kudi. Now we all know that Kapil is also a total Punjabi Munda. So the pairing and on-screen chemistry has come out really well. It’s also easy to guess that during the entire shoot, the duo spread Punjabiness in the air like virus. 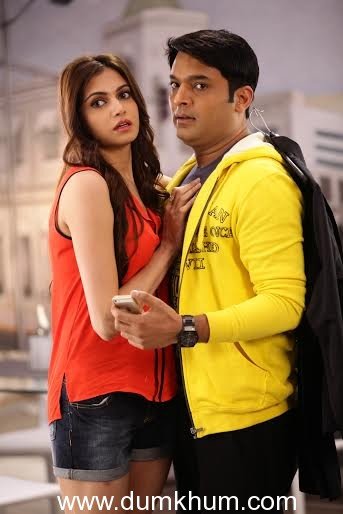 Since Simran and Kapil both have a Punjabi Background, they bonded well on sets. Infact the duo only spoke in Punjabi on the sets which amused the entire crew. They would talk in Punjabi in-between shots and return to their shots and character in a jiffy. It is therefore evident that Simran and Kapil came in a comfort zone and have become friends but Simran agrees that it was crazy on sets with Kapil around. Simran says that Kapil is brilliant with his comic timing and the best comedian she has come across. Her only complaint is that Kapil never left a single chance to pull her leg; we have heard!!