Lucknow,  We all celebrate our annual events and functions with a lot of aplomb, but when we do it with for a social cause, it makes a great difference to those benefited. Sigma Rock Infra Ventures Pvt Ltd – a Lucknow-based real estate company believes and stands for integrity and ethics and this was amply evident in their untiring effort to support and promote the small craftsmen and karigars of Lucknow. Sigma Rock presented celebrity designer and stylist Umair Zafar’s Chikankari Summer Collection 2014 on 1st March at a glittering ceremony at the M B Club in Lucknow to promote the craft and enhance and encourage the craftsmen and karigar community which has suffered greatly due to neglect and lack of promotion. Bollywood diva Rituparna Sen walked the ramp  for Umair Zafar and also distributed prizes and awards to achievers of Sigma Rock. 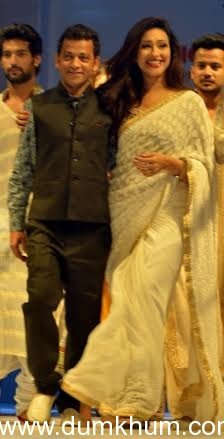 According to Asrar Ahmad Khan, Director Sigma Rock, “We being housing providers relate directly to fashion and lifestyle. This event is one more form to connect people with fashion and lifestyle.  This is yet another feather in our cap. The aim for Fit and Fashion 2014 is to create awareness about fitness and fashion among Lucknowites.” Designer Umair Zafar who hails from Lucknow and is known for his patronage for the culture and crafts of the city of Nawabs in Lucknow said, “This show is for the craftsmen of Lucknow who have long been neglected by other designers and big brands alike. I thank Sigma Rock for supporting us in this noble cause. We are showcasing 35 national and international models to display the designs. I have used the blend of Lucknow’s ancient art –  the chikan with popular modern fabrics. It’s now possible to carry chikan in all seasons. It is not vintage any more. These fusions will give chikan a high fashion and party angle given the fact that over 20 varieties of fabric have been used.”