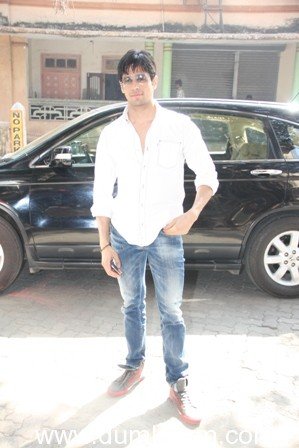 Elaborating more on his role, he plays a more relatable character in this film. “It isn’t an over-the-top role . And unlike my previous film Student Of The Year, where I played a student, I play my age and am shown as a middle-class working man,” said Sidharth. Also admiring Co Star Parineeti, Sidharth mentioned “Parineeti has lot of spunk, energy and there is a good give-and-take with her” and admitted that her role had “more quirkiness” to it.

Parineeti who is working with Sidharth for the first time opinionates Sidharth to be “a superb co-star” who “never gets worked up”.  Talking about her character she adds, “My character is quite a difficult one. I deliberately choose roles that make me nervous. I do a lot of homework and until I get it right, I don’t give up”.

Both Sidharth and Parineeti are happy about working with debutant director Vinil Mathew, a veteran ad filmmaker. “It didn’t feel like the first day of shoot because he is so sorted and knows exactly what he wants. He made us rehearse a lot during a two month workshop before shooting began”, revealed Sidharth.  “Also our producers, Karan Johar, Anurag Kashyap, Vikramaditya Motwane and Vikas Bahl visited us on the sets. We will have enough people to give their inputs on the film’s creative,” he added.