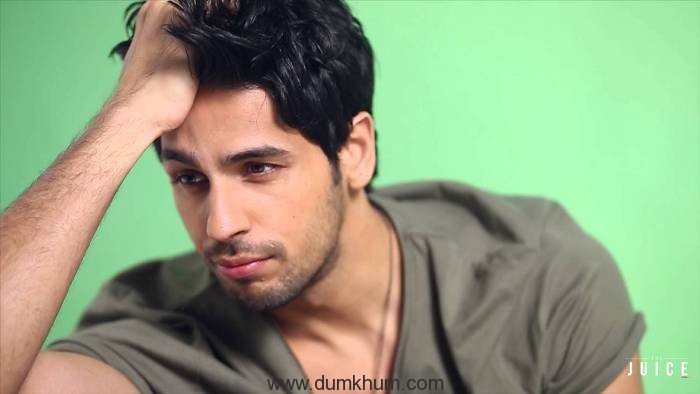 New Delhi : Jabong, India’s leading fashion e-tailer, has launched the May issue of its monthly style guide, The Juice. Rising star and man about town Sidharth Malhotra kicks off anniversary celebrations on the cover of The Juice, wearing GENES – Lecoanet Hemant, available on Jabong.com. In a candid, freewheeling interview, The Juice gets the Kapoor and Sons actor to spill on his Delhi days, struggling to make it in Mumbai and how he almost became a rugby player. Leading fashion photographer R Burman captures him at his languid, relaxed best.

Pairs are the mandate for this season, and the May issue puts together the best pairings in fashion and beauty. Pantone has nominated two spectacular colours for the year and The Juice shows you how to sizzle in them. Learn how to rock the hottest prints right now, from swirls and spots to ornate geometrics. 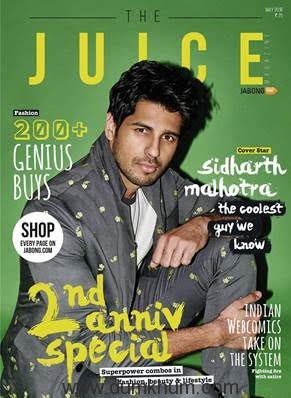 Here are some interesting excerpts from the interview with Sidharth Malhotra.

Sidharth grew up in a middle-class home in South Delhi. In school, he was a below-average student, who was also painfully shy. “I never wanted any attention,” he reiterates. The only time he did a spot of acting was in a Christmas nativity play at Don Bosco School, where he was one of the three wise men. “I only remember wearing a long robe and moustache.” The rest of the time he was pure athlete. His sports obsession started with table tennis, followed by lawn tennis on a clay court. “I was lucky to grow up in Delhi where we have options and the space to play all these games. I also learned basketball on a half-court in the neighbourhood park. We used to wake up early in the morning and play for three to four hours. I played basketball in school as well. It got me a lot of attention from the girls,” he says, grinning impishly.

For a brief period, he considered becoming a professional rugby player. “I was in college when my gym trainer introduced me to rugby. It was gruelling and intimidating, and I thought it sounded cool to say ‘I play rugby’.” After multiple bruises and some professional games, at 21, Sidharth gave it up for modelling. “Ramp modelling brought me a lot of pocket money, so it became a priority.”

Even though he continued to walk the ramps in Delhi and shoot commercials in Mumbai, the Bollywood bug hadn’t bit yet. Then, a casting agent shared his images with director Anubhav Sinha (Ra.One). Much to his parents’ apprehension, Sidharth decided to move to Mumbai to become an actor.

Check out behind the scenes of the shoot here: http://

About The Juice Magazine by Jabong

Launched in April 2014, The Juice is the game-changing new fashion and lifestyle magazine – published by Jabong for the stylish, intelligent Indian woman of now. Delivering an authoritative point of view on fashion and a curation of lifestyle, beauty, travel and culture, The Juice combines the intimacy and luxury of print coupled with the instant gratification technology allows, transporting the reader from page to closet.

Jabong is one of the five fashion ecommerce companies operating within Global Fashion Group (GFG), the world’s leading fashion group for emerging markets that operates in 28 countries. As India’s leading online fashion destination, Jabong is a one-stop shop that offers footwear, apparel, jewellery and accessories to meet the fashion needs of the style conscious men, women and kids. From home grown to exclusive international brands to designer labels, Jabong brings to its customers the latest trends across the globe. Jabong has launched several leading global fashion brands in the Indian market including TOPSHOP, TOPMAN, Dorothy Perkins, Miss Selfridge, River Island, Sisters’ Point, Burton, G Star Raw, Miss Bennett London, Tom Tailor and Bugatti Shoes. Jabong offers prompt and efficient customer service through innovative features like Favshop, Shop the Look and Ask a Friend apart from services like express delivery, 15-days return policy, and open box delivery. Its “Be You” ad campaign highlights individuality and emphasizes the freedom to be a leader and follow own sense of style.