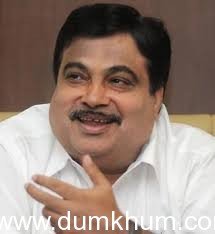 The Union Minister for Road Transport, Highways and Shipping, Mr. Nitin Gadkari will be on a two day visit to Mumbai on Wednesday and Thursday, during which he will attend a slew of meetings and functions related to shipping.

On Wednesday, the June 25, Mr. Gadkari will be the chief guest at the International Day of the Sea Farer celebration to be held at the Swatantraveer Sawarkar Smarak Auditorium, Dadar at 3 p.m.  The Day of the Seafarer, is celebrated on June 25 every year to recognize the invaluable contribution made by the seafarers to international trade andthe world economy, often at great cost to themselves and their families. Seafarers Day, which is now part of the United Nations’ annual list of observances, offers an opportunity to pay tribute to over 1.5 million seafarers for their unique, silent and often overlooked contribution.
On the occasion of the Safarers’ Day 2014, the Union Minister, Mr Gadkari will also honour Indian Sailor Aman Sharma, who was held captive by Somali pirates for nearly four years. The 23 year old sailor from Himachal Pradesh was set free only last week.
In the evening, Mr. Gadkari will be the Chief Guest at the Silver Jubilee celebration of JNPT (Jawaharlal Nehru Port Trust), at Colaba, Mumbai.  Established on May 26, 1989, JNPT has become the largest container port in India, handling around 60% of the country’s containerized cargo. It handles cargo traffic mostly originating from or destined  for Maharashtra, Karnataka, Gujarat, Madhya Pradesh, and rest of North India.
On Thursday, the Union Shipping Minister will take part in the 142nd Foundation Day Celebration of the Mumbai Port Trust. As part of the Foundation Day celebration, Mr Gadkari will hand over communication regarding dedicated sea-facing berthing facility for the Indian Coast Guard at Indira Docks and  another communication handing over sea space at Girgaum Chowpatty to MTDC (Maharshtra Tourism Development Corporation).  The facility at Girgaum Chowpatty will help MTDC to start its proposed amphibian Sea Plane services.  (PS:  As part of the MbPT Foundation Day function, the Union Minister will also hold a media interaction at the International Cruise Terminal .
During his two day visit to the port city of Mumbai, Mr. Gadkari will also hold various review meetings with shipping related organizations such as Mumbai Port Trust, Shipping Corporation of India, DG, Shipping etc.  Ends | 1815 hrs
PIB Mum|MD