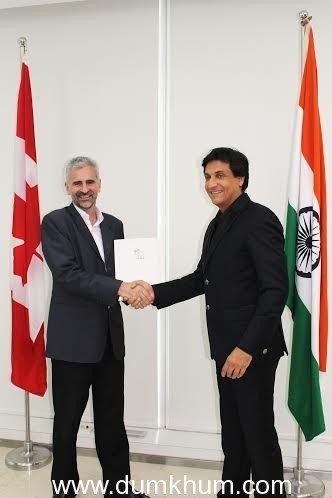 Shiamak Davar received the Governor General’s Visit Medallion and Citation for his dedication towards building friendship and cultural understanding between India and Canada.

The purpose of the medallions is to recognise the contributions made by a small number of very special individuals to the India – Canada relationship in a number of different fields.’ said Consul General Richard Bale. ‘Shiamak is a business person, he has opened dance schools in Canada but his contribution is much more than that. It is an extremely impressive cultural contribution he has made, he has built a bridge between Canada and India through dance Mr. Shiamak Davar has long been an unofficial ambassador for Canada in India. He’s a great friend of Canada who has brought Canadians and Indians closer together through the power of music and dance.’

Shiamak who couldn’t make it for the official ceremony earlier this year was humbled and grateful for this honour and recognition. ‘Thank you so much. This (Canada) is home for me.  This is a real great honour,’ said Shiamak. Canada is first country outside of India where Shiamak started his dance school. For over a decade now Shiamak has made dance accessible for hundreds of dance enthusiasts across Canada giving them an opportunity to learn, perform and make their passion a profession.

The guru of contemporary dance, Shiamak Davar has been on a continuous journey to spread the joy of dance and create a culture connect between nations through performing arts. Last year, as the choreographer and co – director for the Times of India Film Awards (TOIFA Awards in Vancouver, Canada) Shiamak gave an opportunity to dancers from India, Canada, Australia and UK to perform on one stage. From the shooting for the Bollywood blockbuster Taalat the Skydome (now Rogers Center, Toronto), TheUnforgettable World Tour with the illustrious Bachchan family, the IIFA Awards (Toronto) to judging the reality based Bollywood dance show Bollywood Star Canada, he has brought the east to the west making this world a closer place.

At TOIFA Awards, Premier Christy Clark said ‘My friend Shiamak is an example of what makes this Province great. A home in Mumbai, a home in North Vancouver; bridging countries, bridging cultures- This is who we are!’ Premier Clark visited SHIAMAK dance studio in Mumbai during her visit to India.

In fact, when Shiamak was the celebrity judge on the dance based reality show Dance Premier League; he invited Canadian Prime Minister Stephen Harper to dance to Bollywood music on the show.

Shiamak has been working towards creating opportunities for cultural dialogues between India and Canada, and this award is an example of the contribution towards the same.