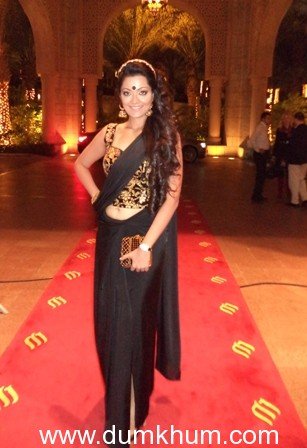 Actress Sheena Chohan along with the director Mostofa Sarwar Farooki attended the prestigious Dubai International Film Festival held in Dubai, for the World Premiere of her film “ANT STORY” (Piprabidya). Dubai International film festival is one of the top ten film festival of the world, which commenced on 5th December and ended with a grand finale on 15th December, 2013.

“ANT STORY” had a special two days screening on 8th and 10th December. The film was showcased with movies like Ilo Ilo,The Lunchbox, Grigris, Stray Dogs, and Fish and Cat that have been critically acclaimed all over the world.

Sheena had returned from Dubai with a lifetime experience of walking the red carpet with the director MOSTOFA SARWAR FAROOKI and represented her film “ANT STORY” (Piprabidya) at the global platform of Cinema. 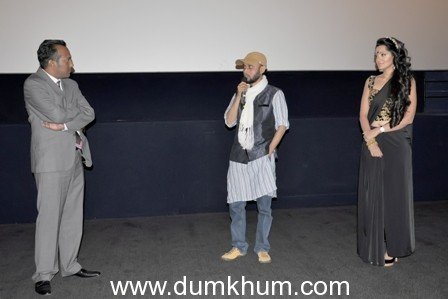 In the film, Sheena has played the role of an actress falling in an emotional & psychic trap. The film has received the very positive reviews from the Jury, and audiences. Her performance in the film was highly appreciated by the audiences, jury member and by directors, artists, & by distinctive film makers who were gathered from the different parts of world under one roof to share the true spirit of cinema.

It was a lifetime experience for Sheena to connect with the Cinemas of the world under one roof. During her visit Sheena got a chance to interact with media at the world level and she has been featured by the prestigious KHALEEJ TIMES for the world premiere of her film and also she attended ELLE STYLE AWARDS night. Sharing her experience, Sheena says; “Felt privileged to be a part of the fraternity of new Global Cinema. Learnt that – we live in a time of confluence, not conflict, where the borders are blurring between national and international cinema as well as commercial and art house. It’s a great gratification feeling for all the hard work that we as a team have put in. Thank you all!” Photographer’s muse, Sheena Chohan was a title winner under the Miss Universe contest and she was the first face of Bangladesh Premier league which gave her the title of BPL girl. Her immense talent, glamour and poise added glitz to the event.