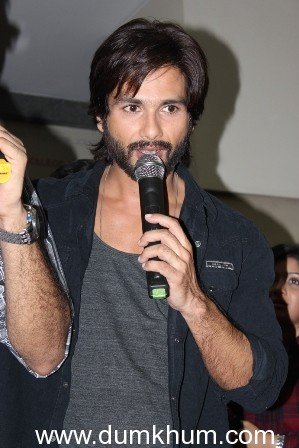 The much awaited film, R…Rajkumar which released on 6th  December had a special screening organized by Shahid Kapoor’s fans, who call themselves – ‘Shanatics’. However, it was the Shanatics who received a surprise when Shahid made a special appearance during the film’s interval.

The ‘Shanatics’, organized a special screening of R… Rajkumar, where the actor opposite Sonakshi Sinha, is seen at his tapori best. Running houseful with Shahid’s die-hard fans, the theatre was filled with whistling, clapping, cheering and of course, plenty of standing ovations for the masaaledar entertainer.

Just when the cheering couldn’t get any louder, the Shanatics were left stunned when Shahid made a special appearance. He gave his fans a pleasant surprise with his visit and interacted with them.

R…Rajkumar is produced by Sunil Lulla of Eros International and Viki Rajani of Next gen films. Directed by Prabhu Dheva, the film released on 6th December.