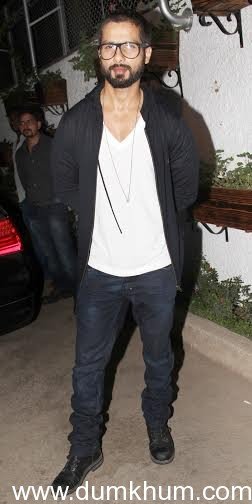 Shahid Kapoor is very excited about his film Haider and he has delayed his London departure so that he can give time to Haider’s promotions before its release.

Haider is very close to Shahid’s heart. It was a challenging film for him and he has put in everything for his performance in Haider.

Shahid has been involved in the nitty-gritties of Haider right from shooting to the post production and promotions.

He has also been actively involved in the marketing of the film and he wants to be present for it till the very end, right until the release

Therefore Shahid pushed the shooting schedule of his next, Shaandar, directed by Vikas Bahl, by two weeks in order to be a part of the promotions of Haider that will release on 2nd October.