SRK was awarded by the President of India, Pranab Mukherjee at the Rashtapati Bhavan among 25 living greatest global Indians He can safely be called the Global Ambassador of Indian cinema world over because of the movies he has done and the love he has got not just from the Indian diaspora but also global audience. Shah Rukh Khan was awarded The Global Indian Legend award by the President of Indian, Pranab Mukherjee at the Rashtrapati Bhavan as a part of the 25th anniversary celebration of NDTV. 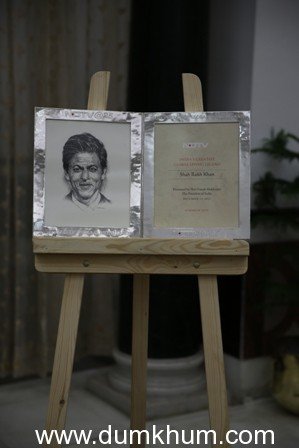 SRK was given the title of unstoppable living legend by NDTV during the ceremony. In his
acceptance speech SRK said, “Never forget to be thankful to almighty, your parents, your family, your friends, the people you work with, the people who work with you and everyone who has been a part of your journey because on your own you are not unique. You are rather  alone! So gratitude should be an attitude. Also never try to be anyone else because it takes away the two greatest gifts from you – the ability to fail and the ability to accept ‘I don’t know’. And lastly, don’t forget to pray.”