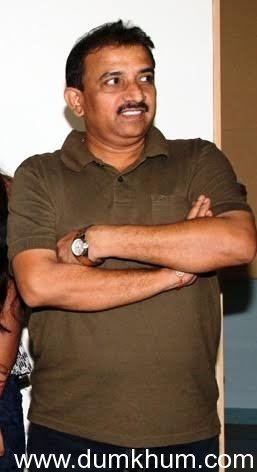 The duo who were on their way to the location, got in through the gate and thereby missed a falling banyan tree by a few inches!
Baba Azmi was already late to the sets due to heavy rainfall and traffic jams. The extreme water logging had caused a few problems for the Chalk N Duster team. When the popular DOP reached Juhu, where the shoot was to take place, he wasted no time in getting in and met director Jayant Gilatar on the way. The director was checking the props nearby. On seeing him, Azmi stopped to give him a lift. As soon as they passed through the gate, they heard a huge thud behind them. The gatekeeper informed them that they missed coming under it by a few inches and a few vital seconds!
Director Jayant Gilatar informs us, “The it was one of those breezy rainy days. I was outside looking at the props, as another tempo was en route. Our DOP Baba Azmi, who had just reached, asked me if I wanted a lift inside, so I went and sat with him. As soon as we moved ahead, a tree collapsed behind us. We stared at each other for a few seconds without a word exchanged.”
Chalk N Duster is based on the life of teachers, the education system and the commercialization of the system in the country, and focuses on the plight of teachers. It stars actresses Juhi Chawla, Shabana Azmi, Divya Dutta, Zarina Wahab and Upasna Singh in major roles, along with Jackie Shroff, Sameer Soni, Girish Karnad and Arya Babbar in pivotal roles.
Chalk n Duster is written by Ranjeev – Neetu. The lyrics are penned by Javed Akhtar and the music is being composed by Sandesh Shandilya.
The movie is Presented by Surani Pictures and is Produced by Amin Surani & Subhash Singh

and is set to hit the marquee on 4th September 2015, on Teachers Day.