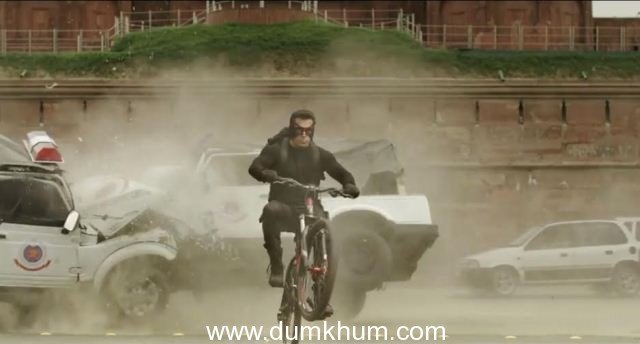 Salman Khan was in a long shooting schedule for Kick in Delhi.
While he was shooting in old Delhi the actor often used to explore the charm and beauty of the city on his bicycle. Cycling is like recreation for Salman and he enjoys the sport. It helps him unwind and keep fit at the same time.
Infact even in the film Kick , Salman has many stunts which he is seen performing on the cycle. There are long chase sequence on the cycle for which he has shot in the capital.
The actor is riding a bicycle in this sequence and he is doing stunts like wheelies and jumping while on the bicycle. They were tough sequence and the actor had to practice a lot to get it right. After his bike rides, he used to practice the stunts in confined areas
Salman’s love for cycling is known to all. He owns his own bicycle and is often sighted riding his beloved bicycle on the streets of Bandra, Mumbai. He ​also ​used to travel to and from the sets and locations on his bicycle.

He rides with his helmet and and protective eye gear making it difficutlt for people to recognize him. He enjoys this time where he is by himself, sans security and other people

​.​
The spokesperson confirmed this and added that, “Salman would often take of​f​ for bike rides post pack up at night. He infact preferred it as his mode of commute to ​the ​sets as well.”