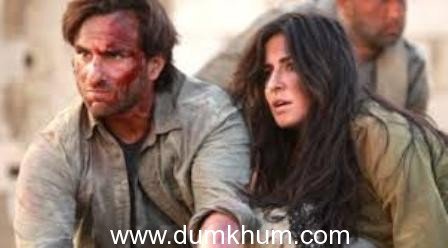 Saif Ali Khan, who will be next seen playing a tough secret agent in Kabir Khan’s ‘Phantom’, recently proved that he is as tough as his on-screen persona. Sources claim that Khan, who suffered a back injury recently, decided to fly to Patiala for the shooting schedule of Phantom despite the injury as he did not want to inconvenience Kabir Khan and the rest of the film team.

The source added, “The doctor had advised Saif to take rest but he decided to go ahead for the schedule as the director had scheduled a high-octane action sequence in Punjab and Saif realised that it would have been difficult to reschedule it later. In Patiala, Saif will be shooting high-octane action scenes with Kaif.”

Dr. RK Agarwal, who has been treating Saif, said, “Saif took treatment, physio therapy  and muscle relaxant, analgesic injection, for the same and felt relief. He could have rested but was keen to fly out for work. He has been advised  not to strain his back.”

Directed by Kabir Khan, ‘Phantom’ will have Saif play a counter-terrorism agent whereas Katrina will play a journalist.