Registrations for the 10th Standard Chartered Mumbai Marathon to open on July 19, 2012; increase in Indian prize fund equivalent to USD 10,000

Ten years is definitely a milestone for a mass running event. It vindicates the belief and the vision shared by the promoters, sponsors and various partners to the event. It justifies the faith shown by the fathers of the city it has been run in. It signifies acceptance by one and all.

In the nine years of its existence and in the run up to the landmark 10th year, the Standard Chartered Mumbai Marathon has achieved all of the above and much, much more.

Besides changing the lives of thousands and thousands of people in the city by introducing them to the benefits of running, the Standard Chartered Mumbai Marathon has also set into motion a running movement that has now taken the entire country by storm. While the ‘Gold Label’ bestowed upon it by the IAAF is recognition of its high organizational standards, the visit of the Olympic Flame to the event is ample proof of its high repute among international road running events.

The Standard Chartered Mumbai Marathon has also touched the lives of countless individuals through its strong charity drive, having helped raise a staggering Rs 71 crores towards charity through its nine editions.

A host of initiatives and events have been planned in the buildup to the 10th edition of Asia’s Largest and Richest Marathon to provide an unforgettable experience not only for every participant, but even for its well wishers, who comprise a large portion of the city’s population. Stringent screening of applications to give preference to the timed runners, a separate quota for women and an increase in the Indian prize fund equivalent to USD 10,000 were some of the additions announced by promoters Procam International as they launched registrations for the marathon and half marathon categories for the 10thedition, scheduled to be run on January 20, 2013.

Registrations for the Full Marathon and Half Marathon in Mumbai’s largest and foremost sporting event will open on July 19, 2012, and physical modes of registration at Standard Chartered branches to close on September 15, 2012 or whenever running places are full, whichever is earlier.

Registrations through online applications and P.O. Box entries to close on November 10, 2012 or whenever running places are full, whichever is earlier.

Continuing in their constant endeavour to evolve and improve while providing the best possible running experience to each participant, and in order to encourage the participation of serious runners in the full marathon and half marathon, it has been decided to only accept applications from runners who have attached a timing certificate from the previous two years.

Applicants who do not fall within the timed runner criteria or the women’s quota can avail of the running places that have been allotted to the NGOs registered with United Way of Mumbai, the event’s official charity partner. These running places will be available with the respective NGOs at a premium and details about the same can be got from logging on towww.procamrunning.in/scmm. Queries will be answered by United Way of Mumbai on or before August 20, 2012.

The dates for registrations, the new initiatives, along with an overall increase in prize money of USD 10,000 was announced byMr. Sunil Kaushal CEO, Standard Chartered, the Title Sponsor, along with Mr. Yajuvindra Singh Bilkha, Head Corporate Affairs, Tata Consultancy Services, the Associate Sponsor in the presence of John Abraham, the Event Ambassador, various dignitaries and representatives from partners to the event.

“With the completion of 10 years, the Standard Chartered Mumbai Marathon has certainly gone the distance,” said Sunil Kaushal, Regional Chief Executive Officer, Standard Chartered Bank. “The Marathon stands for so much of what we believe in: going the distance for our clients, for the industry, for the community; in other words, being ‘Here for good’. We are proud to have been a part of the Mumbai Marathon since its inception and to have seen it evolve into one of the world’s favourite Marathons.”

ENCOURAGING THE SERIOUS RUNNER: Over the years, the Standard Chartered Mumbai Marathon has seen the introduction of various initiatives to encourage the serious runner. After the timing chip was made mandatory for all full and half marathoners, various confirmation criteria were then put into place for those desirous of participating in the same.

For the tenth year, the following confirmation criteria have been put into place for the full marathon and the half marathon:

The applicant must have participated in an event conducted in the past 24 months preceding to race day, i.e. 20th January 2013, which has been ratified/recognised by AIMS or conducted under the aegis of the state/district athletic association or sports control board,

The running events mentioned in the link http://www.timingindia.com/calendar.php are also recognised by us and its timing can be used to qualify for Marathon and Half Marathon race categories.

The applicant must submit the timing certificate (a photocopy) acquired at the events mentioned above along with your application form,

To be eligible for this confirmation criterion, you need to have participated and completed your run in the timings specified below:

Confirmed applicants of the full marathon and half marathon will be eligible for priority line up on race day, based on their finish times. The full marathon runners will be prioritized in three groups, namely below four hours; four hours to under six hours; and six hours and above, while the half marathoners will also be prioritized in three groups, namely under two hours; two hours to under three hours and three hours and above.

Speaking on this latest development, Vivek B Singh, Jt. MD, Procam International said, “These initiatives are being introduced to recognize the achievements of our serious runners, as well as encourage more and more amateur runners to train hard and make a wholehearted effort at attempting the full or half marathon distance.”

Vivek Singh also touched on the impact the early registration window would have on the wonderful exercise of raising money for charity through the event, the biggest positive fallout that has seen close to Rs 71 crores being raised towards charity in nine years.

10,500 running places would be allotted to United Way of Mumbai, the official Charity Partner to the event, which would used to raise money for charity. According to Jayanti Shukla, Executive Director, United Way of Mumbai, 5,000 running places would be utilized for the Corporate Challenge, one of the charity raising categories, while the remaining would be allocated to all the NGOs registered with them. NGOs would be entitled to offer running places to the public or their donor base at a minimum threshold amount of Rs 6,000.

“This is a positive move in order to raise more money for charity and give importance to NGOs. The NGOs now have the time frame to maximize this opportunity by identifying potential donors who can raise funds for them, and give them the running numbers. The objective is to ensure NGOs make best use of the marathon as a unique fundraising platform,” added Jayanti Shukla.

CASH BONANZA: Already the richest marathon in Asia, the Standard Chartered Mumbai Marathon 2012 will now offer an enhanced prize purse of USD 350,000, an increase equivalent of USD 10,000 over what was on offer in 2013. The increase in prize money is towards the Indian prize fund and will benefit the Indian athletes in the full marathon.

The top Indian male and female finishers will now stand to gain Rs 4.50 lakh each.

Registration process: Steps have been taken to provide various avenues for registration to facilitate a hassle-free process. Online registration can be done through the event websitewww.procamrunning.in/scmm or the duly filled entry form along with the requisite entry fee can be mailed to P.O. Box No. 11017, Marine Lines Post Office, Mumbai 400 020. Mumbai residents can also deposit their entry form along with the requisite entry fees at 10 selected Standard Chartered Bank branches, details of which are available on the website.

Entry forms will be available at Standard Chartered Bank branches, at the Asian Heart Institute and the United Way of Mumbai office (309 Kewal Industrial Estate, Lower Parel: Mon to Fri: 10 am to 5 pm). More information can be sourced from theevent helpline no: +91 22 4202 0200, Monday to Saturday between 10 a.m. & 6. p.m. 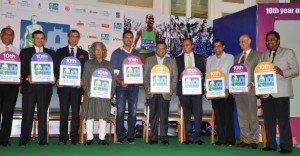 3,000 running places are on offer for the Full Marathon, while 10,000 places will be available for the Half Marathon. The Dream Run, including the Corporate Challenge, will accommodate 24,000 participants. 1800 entries will be permitted in the Senior Citizens’ Run, while 200 entries will be accepted for the Wheelchair Event, putting the total number of entries accepted at 39,000.

Growing in all parameters for the past nine editions, the Standard Chartered Mumbai Marathon has now become the focal rallying point for the city of Mumbai because it espouses causes and values that touch every citizen, whatever the age group and regardless of their financial status and social standing. Promoters Procam International, along with the sponsors and partners, will not cease in their efforts to innovate and evolve in order to provide an inexorable experience to the participant. It’s a collective task and owes its success to the constructive support of all involved. 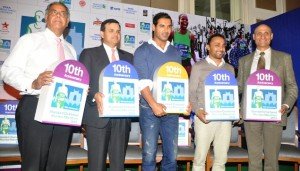