~ Aye Halo is a compilation of 81 tracks that includes all forms of raas, garba, sanedo, bhai bhai aarti and stuti ~ Red Ribbon Entertainment, a music company focused at promoting Indian music across the globe, today announces the launch of its unique and one of its kind album ‘Aye Halo’ for this Navratri season. Aye Halo is a compilation of 81 tracks that includes all forms of Rass , Garba, Sanedo, Bhai Bahi, Aarti and Stuti. Padmashree Anup Jalota lends his voice for the very first time along with Vinod Rathod, Kishore Manraja and Lalithya Munshaw to the album. 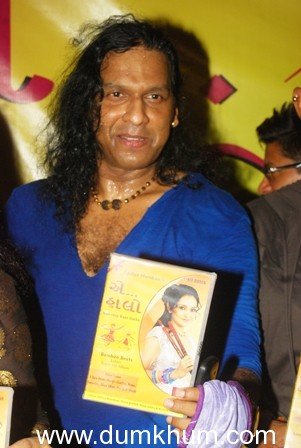 Aye Halo has collaborated with several leading associates to make this a unique creation for this Navratri season. Bamboo Beats, the renowned raas-garba group, brings their 25 years experience to this traditional folk album. Hanif / Aslam duo, famous for Rowdy Rathod & Agneepath music, and MTV coke, plays dhol for the album. Aye Halo is recorded at ‘Ré n Rāgā’, the most technologically advanced music studios in Mumbai. Harmony created by R.S. Mani, known for Veer Zara and one of the most acclaimed keyboardist of India. Commenting on the launch of the album Lalitya Munshaw, Managing Director, Red Ribbon Entertainment said, “I am happy to bring the best artists together to make the best production for the great form of Gujarati folk music with the launch of ‘Aye Halo’ especially created for this Navratri season. We have taken great efforts to select each track of for the album to bring alive the lost sheen of raas garba.” There are two amazing Videos for the same that is “Dholna” and “Aaj Khusi hai” you can view that on Youtube/redribbonmusik & dailymotion/redribbonmusik.

Red Ribbon Entertainment launches this album world-wide with two format of CDs available at all the leading music stores and online websites i.e mp3 and audio format. The music company has received an advance order of 1,20,000 CDS.

Red Ribbon Entertainment PVT. LTD. is Music Company with a motivated mission to promote the highest quality of Indian music across the Globe. The Company is on the forefront in Production, Distribution & Marketing of various genres of music including Film, Devotional, Romantic, Fusion, Sufi, Ghazals, Children, Health and Wellness and Regional in multiple languages. The group boost Artists-Singers/Lyricists/Music Composers, the sales and the branding by organizing high profile events which include music launches by celebrity personalities such as Hema Malini, Rishi Kapoor, Shri Shri Ravi Shankar, Shri Morari Bapu  Shri Narendra Modi- Chief Minister of Gujarat et al. Red Ribbon albums are available in stores throughout India including retail chains in India like Crossword, Landmark, Planet M, Reliance, Music World as well as overseas markets like USA, U K et al. Apart from these there are 100s of distributors all over India. Our website and other online stores across 50 countries allow fans to enjoy, download and buy their favourite music.

A versatile singer, performer and an entrepreneur:

Born in Ahmedabad and now based in Mumbai, Lalitya Munshaw’s fascination with music started at the age of six. The classical training proved to be a platform for her foray into musical territories of Fusion, Bhajans, ghazals, geet, film.  Munshaw regularly gives national as well as international performances.” Lalitya Munshaw a   Versatile singer and a performer class apart. Her previously released albums include ‘Maika Piya’ – Fusion and ‘Rum Gaya Dil’- Romantic. With Lalitya’s deeply religious upbringing the genre of devotional singing has always been her fortay. She has a slew of releases of devotional albums namely ‘Aartiyaan’, ‘Hare Ram Hare Krishna’ with Suresh Wadker, “Krishnarpan” with Anup Jalota and ‘Shri Krishna Janmotsav’. Her forth coming albums are  ‘Rab Piya’ -Sufi and Romantic, “Guru Om” – Spiritual. Her Upcoming Albums are “Gayatri Mantra “- Devotional, “Rab Piya” Sufi Album and “Indian Chill Harmonics” Lounge Album .

In her pursuit for excellence she set up ‘Re n Raga’ as the most technologically advanced music studios in Mumbai, and ‘Red Ribbon’ as a production and distribution company to preserve the wealth and musical heritage and to promote upcoming artists. Her charitable trust ‘Antarang’ works for the enhancement of education, music and empowerment of women.