Raymond crowns Mr. Phani Kumar from Hyderabad, winner at the Grand Finale of its Model Hunt

A picture of calm poise, Phani Kumar said he felt extremely honoured to be the winner of the Raymond Complete Man title.  “When I left Hyderabad for the Grand Finale in Mumbai, I was confident, but had a bout of nerves when I saw the tough competition I had to face from the nine other finalists. It is a dream achievement to have made it as the winner, in Mumbai”

The winner, Phani Kumar from Hyderabad and the runner-up Sandeep Gaikwad from Mumbai were selected after intensely competitive elimination rounds including the Indian and the western wear rounds. The winners have the unique opportunity of being a part of the memorable and timeless history of Raymond. Hosted by Karishma Kotak, the Grand Finale was the culmination of a three month-long activity on Facebook, wherein model aspirants from across India expressed their interest in participating in Raymond’s first ever model hunt. Having received around 200 serious contestants’ profiles, the 10 finalists were short-listed basis set parameters covering physical and intellectual attributes, in addition to their understanding of Raymond as a brand and its qualities. The candidates’ fitment into the brand and values philosophy was a key parameter in deciding the 10 finalists for the Raymond Model Hunt.

The evening of June 13, 2012 witnessed the 10 finalists from across Maharashtra, MP, AP, Punjab, Delhi and Karnataka walk the ramp in the presence of judges – Supermodel and Choreographer Marc Robinson and Advertising veteran N. Sangeetha.

The 10 finalists have, in addition to various other rounds of competition also made videos on “what it means to be a gentleman today” as part of the short listing process. The finalists were groomed and choreographed by Marc. Marc had this to say about the two winners- “Phani is sensitive, his smile and warmth touch your soul, while Sandeep exudes a cosmopolitan, macho personality. Together, they are a perfect blend of the Raymond Complete Man”. 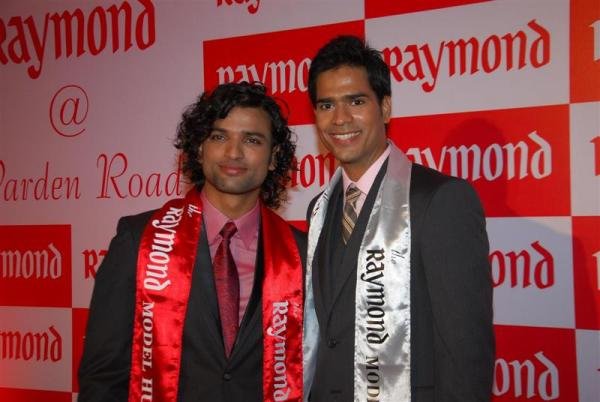 Aniruddha Deshmukh, President – Textiles, Raymond Limited, said, “This is the first time that the iconic brand has conceptualised a unique platform Raymond for young aspiring models across India to make a mark and achieve their dreams in the world of men’s fashion. It was a conscious decision to run the Raymond Model Hunt exclusively on Facebook, as a tribute to the new-age social media friendly Indian male. That this model hunt has attracted the attention of India’s youth is encouraging, as we plan to expand Raymond’s presence in the social media significantly in the future. Following this activity, the Raymond Facebook Page today has over two lakh fans.”

The Raymond Complete Man, conceived two decades back is a timeless campaign appealing to audiences at any given point of time. Even as Raymond’s contemporary collections evolve with the times, the brand still caters to the different faces of ‘The Complete Man’. The Raymond Complete Man crown has redefined the careers of several Indian models such as Keith Sequeira, Parvesh Rana, Rajneesh Duggal, Deepak Bajwa, Inder Bajwa and Anuj Sachdev who have climbed the peaks of popularity in the world of fashion and films.

Today, Raymond has the distinction of being the world’s largest integrated producers of worsted suiting fabrics. As an integrated player, we provide end-to-end fabric solutions right from manufacturing worsted, woollen and linen fabrics to creating suits, trousers and apparel. Its consistent focus on cutting-edge research and technology has resulted in pioneering new products which have set new benchmarks in the worsted suiting industry in India. Raymond has the distinction of producing the finest suiting in the world using super fine wool from 80s to 250s count and blending the same with superfine polyester and other specialty fibres, like Cashmere, Angora, Alpaca, Pure Silk, Linen etc. It produces nearly 20,000 designs and colours of suiting fabric that have found their way in over 55 countries including the European Union, USA, Canada, Japan and Australia among others.