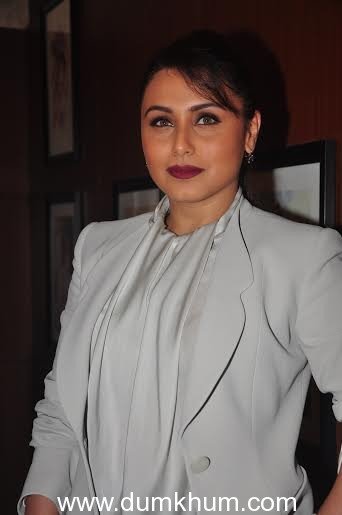 Aditya Chopra’s company has one more Cinderella story. After Parineeti, it’s Bhumi Pednekar , who is the new heroine. Weighing 85 kgs, she is obviously here to change the way we look at heroines. Rani Mukherji was at YRF recently where she saw portions of the film starring Bhumi.
Rani was amazed to see the confidence and screen presence Bhumi had and asked the team to inform her whenever she is around as she personally wanted to meet Bhumi.Bhumi has been part of YRF for a while now… she has been assisting Shanoo in the casting department. Her role primarily was to ensure things are in order for casting…. like the names of participants , the script which needs to be given to them, keeping record of the screen test tapes. Bhumi has been part of the casting for Ranveer  Singh, Anushka Sharma and a few other celebrities who are part of the talent wing of the leading production house. In fact Bhumi was also looking into the casting for Maardani and that’s when she had interacted with Rani closely.However it never occurred to Rani or anyone at YRF that Bhumi could be casted herself. Rani was impressed by the way Bhumi has rendered to the script. She was amazed at her journey from assistant to heroine. Rani who is a superb actor herself was high on praise for Bhumi’s acting prowess. Rani later in the day met Bhumi personally and gave her feedback.

Rafiq Gangjee of YRF confirms and adds, “Bhumi Pednekar is probably the 30th heroine being launched by YRF. She has been getting a lot of appreciation from everyone – talent, directors, writers… all are amazed to see her in this new atypical role which does not conform to any stereotype.