On a recent work visit to Gujarat, I had a spare day in hand at Ahmedabad and wanted to make the best use of it. When my colleague Jagdishbhai suggested that Rani-ki-Vav at Patan and the Sun Temple at Modhera could be covered as a day trip, there were no two arguments. I had read about the splendour of Gujarat’s famed step-wells and seen a short episode of Rani- ki- Vav on NDTV’s 7 Wonders of India series. A quick Google search revealed that the Indian Government had submitted Rani-ki-Vav for inclusion in the list of UNESCO World Heritage Monuments. Rani-ki-Vav was also quite well promoted on television by Amitabh Bachhan in the Gujarat Tourism’s ‘Khushboo Gujarat ki’ campaign. 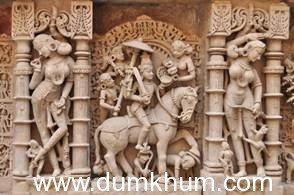 After a two hour drive through a well paved road, going past Kalol, Unjha and Mehsana, we arrived in the bustling little town of Patan, once the capital of Gujarat. Even as the sun played hide and seek, we reached a large ground with a vague board of Archaeological Survey of India (ASI) that announced the step well. But we could see nothing, except vast stretches of well mowed lawn, with shady trees in between. That was because the master-piece lay underneath. This subterranean splendour, better known as Rani-ki-Vav is about 64 metres long, 20 metres wide and 27 metres deep. It was originally constructed of seven stories of which five are now preserved. As we kept going down the steps, we found ourselves in a different world. The next one hour was pure bliss. 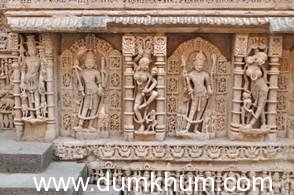 Rani-ki-vav is a highly decorated monument with ornamented panels of sculptures and reliefs representing the height of Maru-Gurjara style of architecture. Most of the sculptures are in devotion of Vishnu, in the forms of Dashavatar, with eye-catching images of Varaha, Narasimha, Rama and Kalki. There is a particularly beautiful statue of Mahishasur-Mardini -the Mother Goddess slaying demon Mahishasur. Apsaras – the celestial beauties showcasing 16 different styles of makeup (Solah Singar) is another highlight. Near the water level, you come to a carving of Sheshashayi Vishnu, in which the lord reclines on the thousand-hooded serpent Till 2001, the visitors could go right up to the end of step-well where the water is. But during the Bhuj earthquake, the structure became somewhat weak and the ASI has now prohibited entry beyond a point. But this decision, in no way hinders you from viewing the delicate works that depict rhythm, beauty and various moods, all in stone. The intricacy of this monument at once reminds us of the sanctity our ancestors attached to water. The Vavs of Gujarat are not merely sites for collecting water and socialising, but also hold great spiritual significance. They were originally constructed quite simply as kunds, but became more intricate over the years, perhaps to make explicit this ancient concept of the  sanctity of water. Befetting its name, Rani-ki-Vav is considered to be the queen among step wells in India.

While we have innumerable monuments built by Kings in memory of their queens, Rani-ki Vav is different. It is believed to have been built by Rani Udaymati, in memory of her husband Bhimdev I, the founder of the Solanki dynasty of Patan. The construction began in 1063 AD and continued for several years. A reference to Udayamati building the monument for Bhimdev I is in the ‘Prabandha Chintamani’, composed by Merung Suri in 1304 A.D. The Vav was later flooded by the Saraswati river and silted over until 1960s, when it was excavated by the Archaeological Survey of India. It is estimated that Vav had nearly 800 sculptures of which approximately 500 are found in pristine condition. 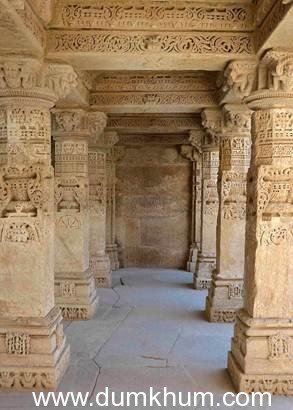 Rani-ki-Vav is a well preserved monument and ASI deserves to be complimented for the good work. Besides continuing the conservation efforts, ASI has also got the monument digitally mapped with the Scottish help. The detailed 3D digital survey prepared by the Scottish Ten Initiative will help better understanding of the heritage monument and aid its preservation.

Rani-ki-Vav has always been a pride of Gujarat. It was in 2012 that an ASI team led by former Superintendent Archaeologist of Vadodara Circle, K C Nauriyal, had prepared a dossier for the step-well for UNESCO’s approval. UNESCO’s WHC advisory team, led by Professor Zhang Jie  of Tsinghua University, China, visited Patan and conducted detailed study of the monument. It even talked to locals on how they perceived the step-well and what it meant to them. Finally, on June 22, 2014, UNESCO’s World Heritage Committee at its 38th session in Doha inscribed ‘Rani-ki-Vav’ as a World Heritage Monument. UNESCO observed “stepwells are a distinctive form of subterranean water resource and storage systems on the Indian subcontinent, and have been constructed since the 3rd millennium BC. They evolved over time from what was basically a pit in sandy soil towards elaborate multi-storey works of art and architecture. Rani-ki-Vav was built at the height of craftsmens’ ability in stepwell construction reflecting mastery of this complex technique and great beauty of detail and proportions.”

Within minutes of Rani Ki Vav being added to the UNESCO World Heritage list, Prime Minister Narendra Modi tweeted “It is a matter of great pride for us. Next time you visit Gujarat, you must visit Rani Ki Vav, an excellent symbol of our great art and culture.”

Surely, when you emerge out of Rani-ki-Vav, you return with a whole new understanding about wells. That wells are not always dark, deep and mysterious; in Gujarat they are also exquisite monuments. And in case of Rani-ki-Vav, a living testimony to the artistry of 11th century Solanki artisans.

Visiting Patan :
Patan is approximately 125 kms from Ahmedabad via Mehsana. Inter-city buses take about 3.5 hours, while a private taxi takes you there in less than 2.5 hours. Shared jeeps are also available, but they are less comfortable. Nearest railhead is Mehsana, from where you will have to travel by road.

It is best to visit Patan as a day trip from Ahmedabad, combining the famous Modhera Sun Temple, also built during the 11th century.

Press Information Bureau – PIB, is Government of India’s nodal agency to disseminate information to print, electronic and new media.
Its news releases, features and photographs can be published freely. Acknowledgement will be apprciated.