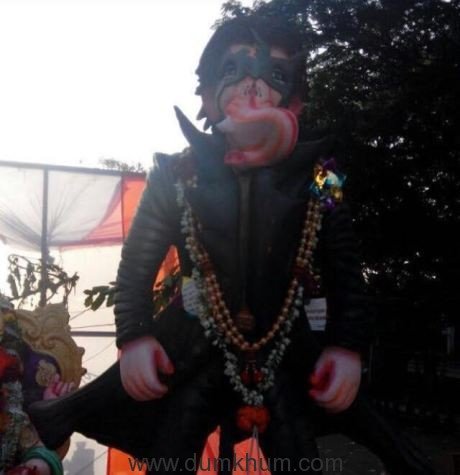 Who would have imagined that a life size vision of Lord Ganesh as India’s favorite superhero, KRRISH would inspire Rakesh Roshan to revive the super hit franchise. Hrithik Roshan took to Twitter to announce that, “Ganpati blessings for KRRISH4 :)) hope everyone is enjoying the festivities. Love to all.”
Speaking on the same, Rakesh Roshan said that, “When my wife showed me a tweet with Bappa’s picture as Krrish, it reaffirmed my belief that Krrish is the original superhero we have. It boosted my confidence and inspired me to make the fourth installment..” He added that, “Ganesha is also called the God of Auspicious beginnings. I guess this was his way of saying that we have his blessings for Krrish 4.” Senior Roshan already has an idea for the movie, which he will be working on. The movie is slated to go on floors next year and will be released during Christmas 2018. The father son duo have an impeccable track record right from Kaho Na Pyaar Hai to KRRISH 3, thereby generating more excitement on the social media platform about KRRISH 4. Hrithik also tweeted an endearing image of Lord Ganesha dressed as KRRISH which was trending on social media all day.
In other news, Rakesh Roshan’s Kaabil starring Hrithik Roshan and Yami Gautam directed by Sanjay Gupta will be hitting the screens on Republic Day 26th January 2017.
Now the question remains, will Bappa be making a cameo in KRRISH 4, watch this space for more!