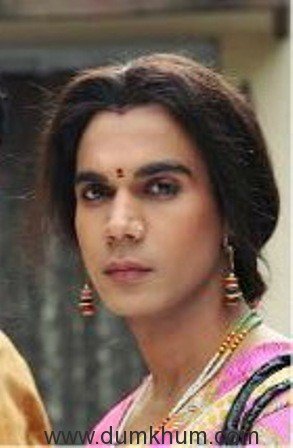 Rajkummar Rao is an actor who like a chameleon can take on the persona of the character he plays, be it the geeky Govind `Govi’ Patel of Kai Po Che!, Shahid Azmi, the intensely passionate human rights activist-lawyer of Shahid, the desperate migrant Deepak Singh of CityLights or Deepu Sebastian, Aligarh’s journalist.
For his upcoming Bengali film, the National Award-winner actor plays a transgender in a Bengali film. He plays a transgender in Aami Saira Bano, and whats more ? He actually Shaved his body for the role ! .
“It’s a story about a boy who is a girl from inside and is drawn towards the transgender community who rechristen him Saira Bano. It was a fascinating story and character and challenged me as an actor,“ informs Raj.

Rajkumar Rao spent two months learning Bengali for the film. He has a knack for languages and he picks them up effortlessly, be it Gujarati which he learnt for Kai Po Che! or Malayalam for Aligarh.

As part of his prep he also spent time with some transgenders in Kolkata listening to their stories.“Some of the stories were really sad but they themselves are chilled out and happy people,“ says Raj who lost a lot of weight for this role. Unfortunately, the film being directed by Rahul Mukerjee, is currently stuck due to financial reasons.

Raj hopes it will be revived soon and wish someone would make a film on a subject like this with him in Hindi. “I would love to play a part like this again,“ he asserts, giving a thumbs up to Fawad Khan who played a homosexual in Kapoor and Sons and Manoj Bajpayee who played one in Aligarh.“Why step back when it’s not about us but the characters we’re living.“

Kudos to you Rajkumar !