Rajinikanth’s magnum opus KOCHADAIIYAAN coming to screens on May 23, 2014 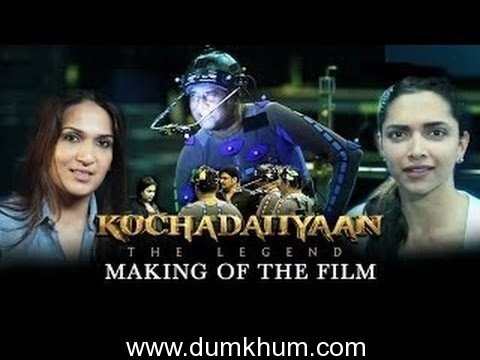 Eros International Media Ltd (Eros International), a leading global company in the Indian film entertainment industry will release the eagerly awaited futuristic fantasy event of the year ‘KOCHADAIIYAAN’ – The Legend, a Mediaone Global Entertainment Limited production, directed by Soundarya Rajnikanth Ashwin, worldwide in cinemas on May 23rd 2014, two weeks after its previously announced date of May 9th 2014 to cater to the demand for multiple language and the 2D and 3D versions to release the same day.

Kochadaiiyaan features the unique visual mastery of Photorealistic Performance Capture technology for the very first time in the history of Indian cinema. The film is being released in six Indian language versions Tamil, Telugu, Hindi, Marathi, Bhojpuri and Punjabi, simultaneously in 2D and 3D in over 6000 screens worldwide. Although the entire unit was optimistically gearing up for a 9th May 2014. release,  due to some unexpected technical issues, this mammoth worldwide release in multiple languages in 2D and 3D is now set to release on 23rd May 2014.

The fans frenzy for Rajinikanth’s Kochadaiiyaan has begun months in advance and their wait is almost over. Rajinikanth appeared on Twitter for the very first time on 5th broke the record for the first day followers by any Indian movie star by getting over 2.5 lakh followers on the first day itself.

Kochadaiiyaan is an epic dramatization of good versus evil starring South Indian megastar Rajinikanth in a double role in a larger than life depiction. Also starring in the grand production is leading lady Deepika Padukone together with South India’s leading stars R. Sharath kumar, Nazar, Aadi, Shobana and Rukmini.

Providing the musical score is Oscar-winning composer A R Rahman, whose list of credits includes a BAFTA, a Golden Globe and two Academy Awards for his outstanding musical contribution for the multi-Oscar winning film Slumdog Millionaire.

Kochadaiiyaan was shot extensively at Pinewood Studios in the UK with a team of world-class technical experts including the London based Centroid Studios, a state-of-the-art facility for Full Body Motion Capture, which has worked on various Hollywood productions including the recent Brad Pitt starrer World War Z as well as Pirates of the Caribbean, Ironman 2 and Harry Potter, of May and he instantly and Counter Punch Studios from Los Angeles, who have been behind successes such as Beverly Hills Chihuahua. They worked in collaboration with Faceware Technologies, United Kingdom, who have worked on The Mummy 3 and The Curious Case of Benjamin Button for the Facial Capturing technology. A team of technical experts from South India and China have worked on this technology, with the best production facilities in London, for the overall completion of the project.