Rajinikanth – Motion Captured & How by some of the biggest International Studios ! 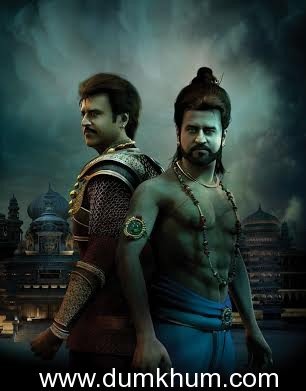 Superstar Rajinikanth will be seen in the country’s first ever film using Photorealistic Performance Capture Technology, Kochadaiiyaan – The Legend. For the first time in his career, he was required to adorn a special body suit with track points on all of the joint areas while infrared rays tracked every movement which was then recreated on screen. This was coordinated by the same team at Centroid Studios who were behind Brad Pitt’s World War Z.
Rajinikanth’s every motion was captured digitally on screen which was then animated.In addition to this Counter Punch Studios from Los Angeles, who have been behind successes such as Beverly Hills Chihuahua, were engaged for Facial Capturing technology together
with Faceware Technologies who have worked on The Mummy 3 and The Curious Case of Benjamin Button. Facial expressions are captured with a technology called markerless facial capturing which deploys a Head Mounted Camera on each actor including Rajinikanth to capture there subtle facial movements. This is a standard benchmark in recent Hollywood films like Avatar.
To ensure Rajinikanth was recreated and animated with the utmost precision, during the shoot in London, dentists were called to the studio to take a mould of Rajinikanth’s teeth so that it could be recreated onscreen to look like an exact mirror copy.
Speaking about the experience, Soundarya says: “It was amazing to see my father’s every move, gesture and expression on a screen in an animated form. Everything was created with the art director’s imagination based on my input on what I had visualised. The shoot took place at the world renowned Pinewood Studios and filming was conducted in a blank studio. The whole process was very technical, with wires, electrodes, ,technicians, black body suits, head gears, chroma screens everywhere – it lacked colour and it was also very difficult to see how the film would turn out as once we motion captured the talent, everything was created afterwards around that.My father is not a novice when it comes to special effects and introducing technological innovations into our cinema but this process equally excited him.“
Talking about the first time ever attempt in India, Rajinikanth adds“ I don’t know much about this technology but it is definitely different and I felt we should do something new that no one has ever done. I asked Soundarya since it is a big thing and she has huge responsibilities with
it, can she be able to accomplish it and she was confident she could definitely do it. We cannot explain in words how hard it was, how everything was created”.
Kochadaiiyaan is set to blaze a trail globally on May 9th with its Performance Capture Technology, as it rivals and transcends the technological capabilities of Hollywood masterpieces Avatar, Tin Tin and Beowulf.
Rajinikanth is cast as the archetypal superhero in the epic dramatization of good versus evil. He performs a dual role with the reigning Queen of Indian Cinema Deepika being paired opposite the younger character. They are joined by current and veteran stars of North and South Indian Cinema such as Jackie Shroff and R. Sarath Kumar for a global, Pan-Indian cinematic treat .