Raaz 3 takes the nation by storm ! 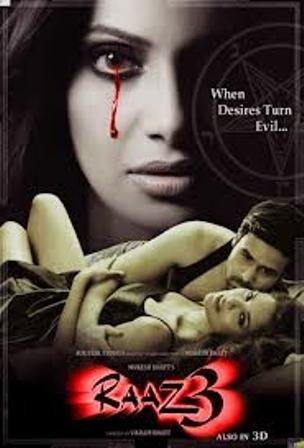 Fox Star Studios and Vishesh Films , 3D horror, Raaz 3 stormed the box office as it saw its nationwide release yesterday,opening to a record-breaking collection of 11.05 cr nett on its first day,making it the biggest opening day not just for a Bollywood 3D but also for an “A” certified film.While the film had the cash registers ringing with paid previews registering an opening of 80-80 percent,single screens and multiplexes too opened fantastically ,making it the 5th biggest opening of the year 2012.

Raaz 3 is also the 15th film to cross the 10cr nett on its opening day proving to be production house Vishesh Films and actor Emraan Hashmi’s biggest opening till date.

Commenting on the figures says Mr.Vijay Singh,CEO Fox Star Studios ” Raaz 3 has started on a spectacular note – audiences are loving the human drama of a man caught between two beautiful women , the never before seen 3D quality in a bollywood film , and in particular, the cockroach scene which compares with the best of Hollywood – it’s to be seen to be believed!!”.

Starring Emraan Hashmi,Bipasha Basu and Esha Gupta,Raaz 3 directed by Vikram Bhatt follows the journey of a fading superstar’s revenge against a rising star.

And while the film is expecting to fare better over the weekend, critics too didn’t hold back on their support for the film.

Says Rachel Saltz,New York Times ” “Raaz 3” seems most conspicuously a Bollywood product: a hybrid that takes what it needs from myths and movies to tell a romantic story with a neat moral.“Raaz 3” delivers other goods: some horror thrills, some true-love-versus-evil thrills and some unusually steamy bits.”

Says Taran Adarsh “RAAZ 3 is a story of staunch Indian beliefs and convictions in conjunction with a lethal combo of sex and horror in 3D, competent performances, an engaging human drama and most significantly, there’s a gigantic brand value attached to it, which has worked extraordinarily well with the masses in the past.

Adds Joginder Tuteja ” Vikram shows once again that he knows how to ‘climax’ well. No punintended 😉 He gets it right, and how. This year so far, Bipasha only has Vidya Balan (Kahaani) as her competitor at awards. A promise well kept by her. While Bipasha is fantastic, it is good to see Emraan in a role where he can’t be his ‘shaana’ sorts and instead plays a regular guy. Raaz 3 is all set to be a sure shot hit especially with good returns in interiors. Bhatts can celebrate.”

Elated with response the film is receiving ,says producer Mahesh Bhatt “I can smell roses everywhere. I am intoxicated with the response we got on the opening day, what staggers me even more is the fact that the figures are higher on the second day. I couldn’t have asked for more “.

Adding to that ,says director Vikram Bhatt “I’m overwhelmed with the response the film is receiving….As a director there’s nothing better than knowing that audiences are embracing the film and that our efforts are bearing fruit”.