R.Balki announces the title of his ambitious next. 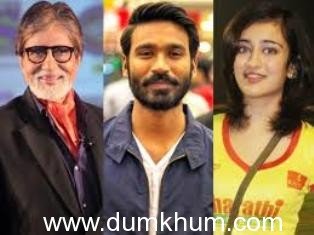 Celebrated director, R.Balki ,of Cheeni Kum and Paa fame announces the title of his much awaited film ,starring the one and only legend Amitabh Bachchan and National award winner Dhanush . The film also marks the big Bollywood debut of Kamal Haasan’s daughter Akshara Haasan.

While there was much speculation on the title of R.Balki’s next, details have been kept under wraps this far. The film that is currently on floors ,has been in the limelight ever since its announcement and the wait is finally over, as the makers now announce the title.

Says director R.Balki ,  “We are happy to announce that the film is titled “Shamitabh”… As in SH before AMITABH. We are half way through shoot of the film ,so will finish and talk more about it. Right now I’m enjoying watching the lethal combo of the intensity of Amitabh Bachchan..The intelligence of Dhanush…and the innocence of Akshara…in action daily.”

Written and directed by R.Balki, with cinematography by the legendary PC Sreeram who shot Nayakan, Agni Nakshstram, Alaipayuthe(original of Saathiya)besides Balki’s Paa and Cheeni Kum,Shamitabh will also have music by Ilaiyaraaja who is possibly  the greatest music composer this country has seen.

The film is currently on floors.