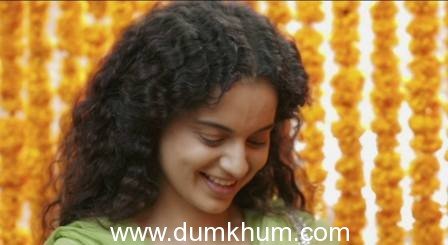 The official twitter handle of Queen, @Queenthefilm, recently gave three of its followers couple passes to the famed Hard Rock Café, Mumbai for the New Year’s Eve. The passes were prizes given out to the winners as a part of their twitter contest that went on for 2 consecutive days.

The twitter handle of Queen began its contest on December 27th questions related to Rani and the film’s trailer. The questions varied from ‘Rani ka haal kiske jaisa hogaya hai?’ to ‘Rani ke hisaabse uska sense of humour kaisa hai?’ and ‘What does Kangana wear to the club?’ The contest which ended on December 28th the famous Hard Rock café in Mumbai for the New Year’s Eve. The contest was based on the movie’s recently released trailer, which, with its comic and quirky moments intrigued the audience about the desi girl ‘Rani’ and the movie itself.

Presented by Viacom 18 Motion Pictures, Queen is a Phantom Production. The Kangana Ranaut starrer is directed by Vikas Bahl, and produced by Viacom18 Motion Pictures, Vikramaditya Motwane & Anurag Kashyap. Queen is scheduled for release on February 28, 2014. asking the fans of the upcoming movie, picked out three winners who won couple passes to