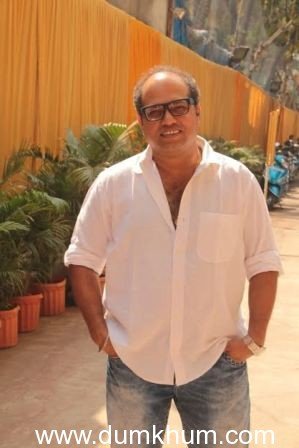 Extremely talented and renowned Cinematographer, Director and Writer Sanjay Jadhav is back with another hit formula along with Dreaming 24X7 and STV. On Monday morning, Sanjay Jadhav along with his team recorded the Muhurat song of the movie ‘Pyar Vali Love Story’ at Ajivasan Studio. The first song of this romantic movie is a dance number ‘Hum bole toh….’ sung by Amitraj and Rohit Raut on the beautiful lyrics of Mangesh Kangane. The music director Pankaj Padghan added the foot tapping beats to this strong dance number. The Muhurat song quickly grabbed attention of the people around and will soon be the delight for listener’s ears. The movie is all set to release on August 29, 2014 across Maharashtra. The captain of the ship Sanjay Jadhav will soon sail through with his next successful formula after Blockbuster hit Duniyadari with the same team as lead artist Sai Tamhankar and Swapnil Joshi. The film will hit on the floor for shoot from March 2014.