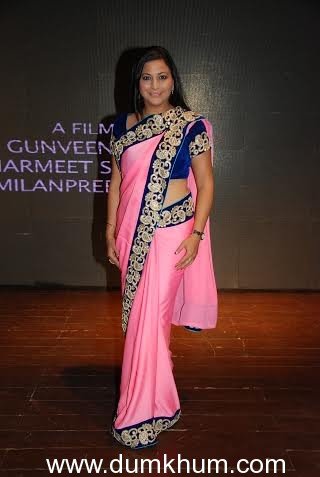 Gurpreet Kaur Chadha of Punjabi Global Foundation organized Mumbai’s first premier of Dark Tunnel- a known voyage to death, the award winning movie in the Sikhnet Youth Film Festival; Jaspinder Narula was the chief guest for the show.Dark Tunnel presented by Adol Passionates is a film based on drug addiction & Sikh way of life. Adol Passionates works towards upliftment of society through the medium of media by producing short/ feature films touching upon sensitive topics. Gurpreet Kaur Chadha, founder of Punjabi Global Foundation took up the initiative of promoting a thought provoking movie & organized its first Mumbai premier attended by the members of the PGF foundation & many others from the Sikh community.Jaspinder Narula was the chief guest for the preview; also present were Mansi Pritam, Ashoo Punjabi, Gunveen Singh, Surinder Aunty, and Surpreet Kaur. Gananay Chadha accompanied his mother Gurpreet Kaur Chadha to the movie preview. Dark Tunnel star casts Gunveen Singh, Harmeet Singh, and Milanpreet Singh.Punjabi Global Foundation was founded by Ms. Gurpreet Kaur Chadha and other eminent members, who have been guide and teachers in their own way. It is to promote the rich cultural heritage of Punjab on national and international horizon.
The organization is dedicated to the preservation, promotion and dissemination of the rich Art and Cultural, Traditional Heritage of Punjab among the youth and new generations.