Consistent with the superlative works of literature unveiled during the days prior, Day 4 at Tata Literature Live! The Mumbai LitFest enthralled attendees with the launch stellar literary works by globally acclaimed authors! 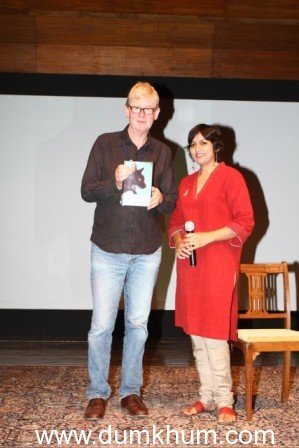 Introducing her latest work The Wildings was noted Indian journalist, columnist and literary critic Nilanjana S. Roy. The book follows the lives and camaraderie of a small band of cats that live in the labyrinthine alleys and ruins of Nizamuddin, an old neighbourhood in Delhi. Unfettered and wild, these and the other members of the tribe fear no one, go where they will, and do as they please until, one day, a terrified orange- coloured kitten with monsoon green eyes and remarkable powers, lands in their midst setting off a series of extraordinary events that will change their world forever. Concluding the series of book launches at the distinguished cultural and literary platform was renowned historian Roddy Matthews who presented Jinnah vs. Gandhi who’s unconventional approach towards chronicling history circumvents the common comparison of Jinnah with Nehru, juxtaposing him with Gandhi — their Father of the Nation versus ours. The book highlights some striking similarities between both leaders such as them being politicians as well as ideologues, where one demanded Pakistan while the other’s influence kept the independence campaign on both sides largely non-violent. Both succeeded, yet ultimately both failed. Matthews looks at how these two very different individuals helped shape their two very different nations in the same time and place.

Shyam Benegal, the noted filmmaker released the book, “Bollywood’s Top Twenty, Superstars of Indian Cinema”. The book is edited by Bhaichand Patel and contains profiles of 20 most prominent stars, beginning from K.L. Saigal to Kareena Kapoor. The book celebrates 80 years of sound in Indian cinema. The profiles have been written by such eminent journalists as Jerry Pinto, Bhavna Somaya, Sidharth Bhatia, Deepa Gahlot and Niranjan Iyengar.

Tata Group is the title sponsor for the festival, supported by Landmark, Tata Steel and Land Rover.