HITS #1 ACROSS RETAIL AND DIGITAL CHARTS WITHIN 4 DAYS OF ITS LAUNCH!

OVER 100,000 singles SOLD within a week of its release, an unprecedented record for single sales in India! 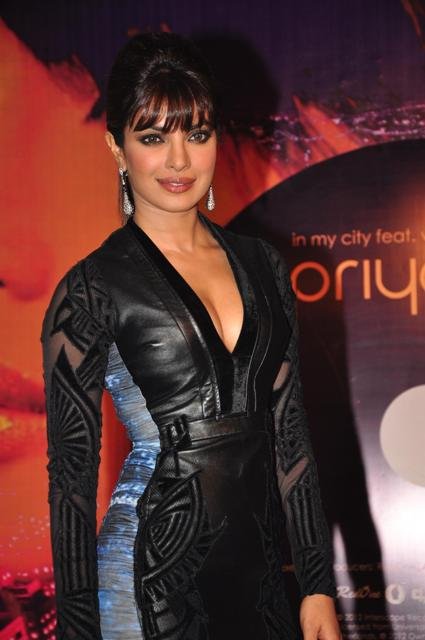 The girl has got it all… With a hugely successful acting career under her belt,the multi-faceted Priyanka Chopra has now conquered the music world as well. The Bollywood superstar, whose debut International single “In My City”featuring Will.I.Am was launched in Mumbai on 13thSeptember`12on Universal Music/2101/DesiHits!/Interscope, has broken records as the sales for her single have been simply exceptional across the country, already selling over 100,000 singles (cumulative)within the first week of its release!

“In My City” featuring will.i.am and produced by RedOne, is an emotional, feel-good song that bridges the world of dance music with elements of nostalgia, echoing sentiments of hometown pride. The song has seen instant chart action across retail and digital stores. Available for download exclusively on the Nokia Music Store, the song has made it to the #1 spot on the International download chart. The CD format too has debuted straight in at the #1 spot on the pan-India Planet M and Music World International Top 20 retail chain charts.

The `In The Studio’ (EPK) that has been uploaded on Universal Music India’s official YouTube channel has seen over 300,000 views till date, while collective views of the EPK and the song has already surpassed the 1.2 million figure mark and counting.

Priyanka, who is currently in LA to shoot the video for “In My City” feat. Will.I.Am, is ecstatic on the single’s performance in India “I am so overwhelmed! I can’t even begin to explain what I’m feeling… it’s so amazing that it’s been just a few days since launch and my debut single is now No. 1 on the charts.  Thank you so much for the support and appreciation. This means the world to me.”

Universal Music Managing Director, India / Saarc Devraj Sanyal said “We have been in the non film music business for a while & I must admit to mounting engines across all platforms that have been fired like never before on Priyanka’s global single debut. But to see these results so quickly is beyond gratifying. This is just the beginning with massive TV, Radio, On ground & Digital campaigns on the verge of rolling out. I am confident that this single will break every record in music that India has had thus far. The path is also being laid for the follow up single & album expected in the very near future.”

Her successful music debut has added yet another dimension to this actor, humanitarian, green crusader and brand ambassador.  Priyanka Chopra, one of the most recognized talents in Indian cinema, is a recipient of the prestigious Indian National Film Awards amongst many others. She is acknowledged as one of the most versatile actors with many path-breaking performances.  Priyanka is also actively involved in her role as the National Ambassador for UNICEF in India and the Green Ambassador of a nationwide environment awareness campaign in India.